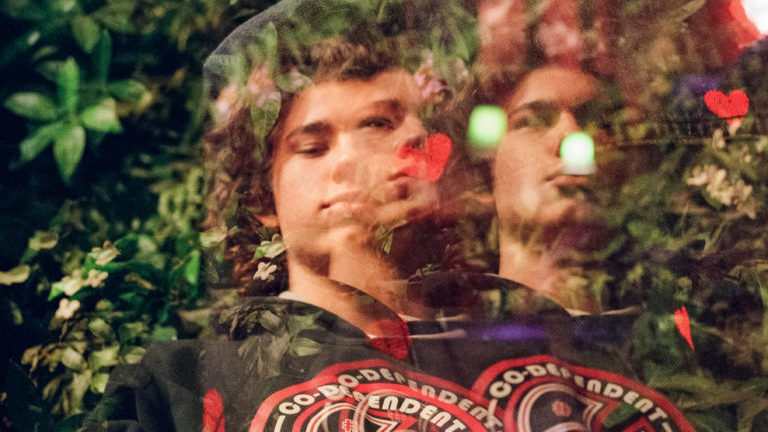 e4444e turned heads in August releasing his second EP ‘Mr Dover and The Endless Rovers’. Now he’s turning them hard back the other way with an EP of remixes that reimagines the natural splendour of four of the standout ‘Mr Dover’ tracks.

e4 hands over the stems to Sonic Boom (MGMT/Panda Bear/Beach House), Rebel Yell, KCIN and even takes a turn himself. The EP contains developments of existing ideas as well as sharp turns into darker, more industrial territory. Listen to the whole thing down below and read on as For The Record co-host Dan Gordon catches up with e4 ahead of his set at FBi Turns 15.

Dan Gordon: The last year or so seems like it’s been pretty busy for you. You’ve emerged alongside Fritz at the forefront of Newcastlemusic right now. What have been your year’s highlights?

e4444e: Hmm, I cant think of anything specific. Days fly by. I like driving around with my friends n playing shows around the east coast. Skating rest stops on the way to a show is usually the best part of the day.

DG: There are some pretty big names on this EP with nods from Rebel Yell and Sonic Boom, but what made you want to follow up ‘Mr Dover’ with a remix EP?

e4: I really like remix eps of songs I love, especially ones that have pretty far out stuff on them. You can recognise little pieces of the songs you’re already attached with and it helps you get into something you maybe usually wouldn’t listen to. Gateway songs.

DG: With you playing our 15th birthday festival I’m interested to know who was on high rotation when you were 15?

e4: That was around the time me and my friend started jamming samplers and guitars, sorta just getting into textural music. A lot of animal collective, we were heavy into Black Dice’s Creature Comforts (gateway songs). The Soft Pack, Jerry Paper’s Volume One. Dinosaur Jr on the bus. I think maybe some drone stuff like Eliane Radigue by then too. Oh yeah and Actress’ R.I.P. Things will never be the same.

DG: You’ve started to play some bigger shows, supporting Hatchie, The Dinosaur City Records Party and now FBi Turns 15. How has the reaction to the new songs been so far?

e4: Pretty cool. People seem to dig a lot of the stuff. Cool to play it live too, people can get really into it or not at all. Why is this guy playing a 3 minute song for 8 minutes?

DG: Hearing these songs warped so far from the original had me wondering if you had any plans to collaborate with anyone on e4 music in the future.

e4: Collaborating for me seems to work best with my friends, like making recordings with my brother or something. I dream about playing with people but I think id rather make something more personal and not really set up to get a specific sound from someone or anything. Been thinking about getting a band together and playing a bunch of new stuff, Noah’s a pretty good bass player.

Listen below then see it live at FBi Turns 15.

PREMIERE: The party's not over on MAWiE's 'Last Night Was Too Lit'