Review :: Am I – Sydney Festival 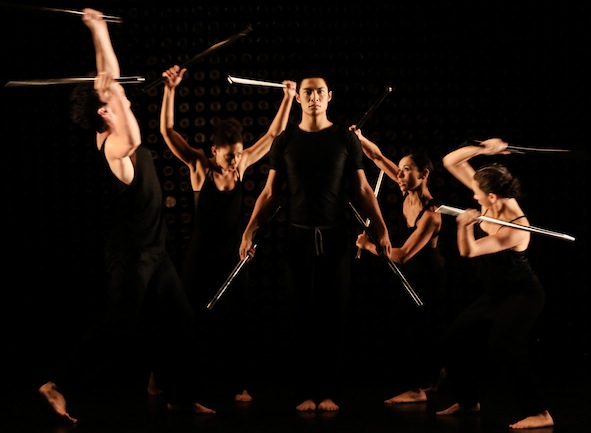 Strolling into theatres has almost become self-admission to pretentious existential commentary being shoved down your throat.

Even with prolific Sydney-based director Sean Parker‘s name behind it, ‘Am I’ sounded as though it would fit the cookie-cut cultural narrative explored a hundred times over. How wrong I was.

Enshrouded in the hypnotic soundscapes forged by composer Nick Wales (who has previously lent his sonic mastery to Sarah Blasko and Sydney Symphony) the audience is immediately plunged into an enchanting realm where anthropology, neuroscience and cosmology intersect.

Classical Indian dancer Shantala Shivalingappa commands the stage, offering evocative musings that parallel with her hypnotic gesticulating. While gliding gracefully in and out of darkness, her contemplative observations inform the other six cast members who move seamlessly across the stage in relaxed yet sophisticated black attire. Their bodies become vehicles for Shivalingappa’s carefully articulated revelations, shifting between soft elongated manoevres and short sharp pulses (that are a hell of a lot harder than they seem, I’ve discovered). 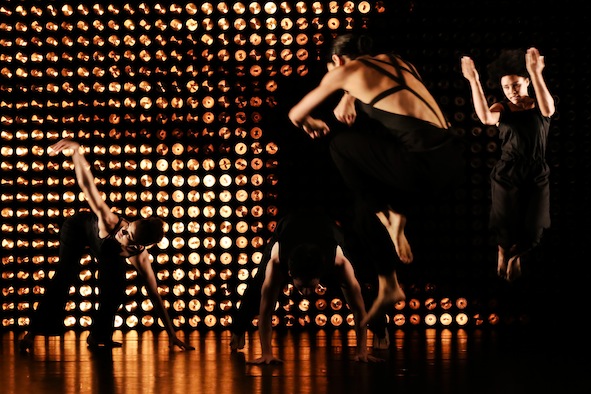 A wall of warmly-lit globes lines the back of the stage, adjusting from a hazy glow to a dazzling responsive display that intensifies into a blinding mass, forcing audience members to shield their eyes at one point – both momentarily snapping all out of the trance, and shrewdly illustrating humanity’s vulnerability against external forces.

The dancers brandish metal rods that function like prisms, glimmering through the darkness while a single metallic hand fan cuts through the air with thunderous claps. Cue choreographic brilliance, as these simple objects become central to the meticulously crafted physical sequences. The most jaw-droppingly spectacular involves the dancers depicting all the existing names for god, from Jehovah, to Quetzacoatl and Zeus. Human responses and emotions are exposed as mere evolutionary traits, and pi is even thrown in to pummel you into a humbling sense of insignificance with more nerve than your year 11 maths teacher. And just when the narration nears preachy, small slices of fourth-wall corrupting humour are fed to the audience. Nom nom nom. 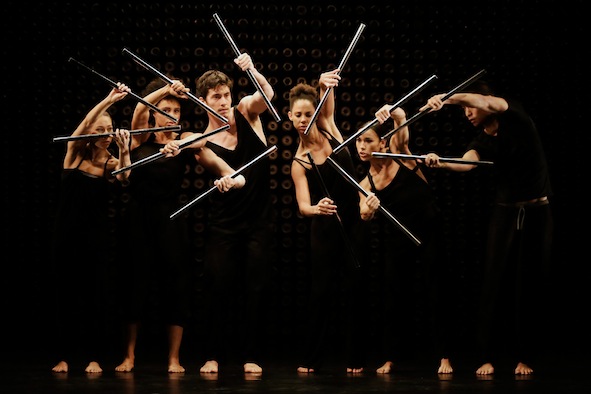 Drifting in and out of visibility are the band, unexpectedly (“oh, THERE you are”) perched atop the set – perfectly positioned to preside over the piece. Fusing traditional Armenian folk songs with Medieval drone, Middle-Eastern percussion and Western stylistic techniques, mastermind Wales successfully absorbs all into a spectrum of meditative, arresting sounds. Pulsing tribal beats and gentle hums battle against chaotic polyphony and primal shouts, lulling and prompting the mind with poignancy.

Maybe it was all the glare from those globes, or the calm breathing of the little old lady who sat beside you, but by the end of the 75 minutes, you’ve grown comfortable in the time warp.

You leave, not wondering “What the actual fuck did I just witness?” as per usual, but finding your feet with notions you’re used to tripping over. That doesn’t give you permission to dance, though. Seriously, please stop.