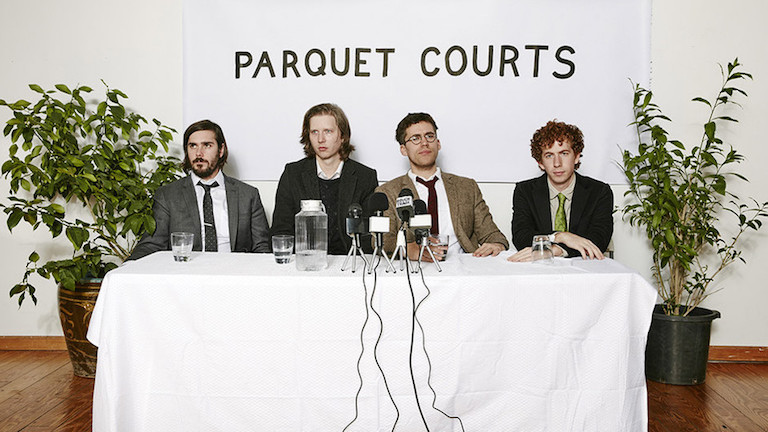 Human Performance is the third proper album from New York City band, Parquet Courts, and it took them the longest to write. As the mid-year ‘best of’ album lists roll out, it’s become apparent that the time spent writing this album has contributed to its longevity. It’s their most earnest sounding work to date, and, while not explicitly political or personal, it rings with a closeness to the emotional experiences that have defined the band in the past year.

Don’t be mistaken, there are still classic moments of Parquet humour in the head-scratch of ‘I Was Just Here’, and tracks like ‘One Man, No City’ coast along in a coolly dissociative state. Ultimately, though, it is a a newfound introspection that lies at the heart of Human Performance.

Darren Lesaguis caught up with co-frontman and guitarist Andrew Savage about his synesthesia, the American epidemic of gun violence, and navigating the self between expressions of authenticity and performance.

The album is a culmination of a year spent recording, with a bulk of it at Dreamland in New York. Did you guys feel like you needed the time and space to record Human Performance, as compared to other records?

Well, it was a while ago that we realised that the best way for us to record was to fully immerse ourselves in our work, so we can submit to it and basically be available for every potential creative moment. So we knew we wanted to get outside of the city, we knew we wanted to be somewhere where we could do just that, we could be living with our work – living alongside the record Human Performance. There’s never been a sort of ethos to our process. Each record is different. Content Nausea was recorded within a week, virtually written that week too. Human Performance took 52 times as long as that to make.

I’m sure there’ll be another record that’ll be a very quick one, that sort of promises a bit of an easy, first time charm feel to it. But I think we all knew with Human Performance that there was gonna be a more considered essence to the record.

Parquet Courts is a visual project as much as it is a musical project for you. Can you walk us through the process of translating your music into artwork?

There’s a bit of a synesthesia to it. I associate sound and vision very closely. They’re complementary to me, if not virtually the same. So because I have that sort of relationship with music and art it just kind of makes sense to me that the visuals from the band should come from within it and we all play our extra roles in the band. Austin mixed Human Performance, so it’s another way that I can contribute to Parquet Courts and make it something that comes uniquely from us, which is I think something that fans respond to. That there’s so much about Parquet Courts that’s very much unique to the four individuals making it.

Speaking of fan response, I’ve heard that if someone has a tattoo of some Parquet Courts artwork they get free entry to all your shows for a lifetime, is that right?

Let’s not go spreading that rumour [laughs]. Because first of all, that’s not supposed to be an incentive – I don’t encourage anyone to that, but it’s funny that you should bring that up because literally minutes before you asked me this, someone from Brisbane sent me a tattoo that they got. And so I just wanna say I do not condone you foolishly wasting space on your skin for Parquet Courts, but if you must, and there are a few caveats… but yeah, sure.

Surely your artwork is worthy of being permanently inked on someone’s body. I think it would be.

You know what, I’m gonna leave that up to someone else to decide. If you’re old enough to get a tattoo, you’re technically an adult in the eyes of the government of Australia. Do whatever you will, just don’t say I encouraged you to do it.

New York City is this character that pops up throughout the record as an entity that you engage with. What it is about New York that elicits such a response from you?

I think that every artist has to have a relationship with the place that they’re from or the place that they live. It certainly makes their work more interesting and adds dimension to it. And most artists that I admire do have that sort of relationship and I think it’s the key to being a successful artist – to honestly address where you live. Where I live is New York City and it influences who I am, just as any artist’s setting influences who they are and how they create their work. So it’s never really anymore considered than that. I address it because I have no choice.

‘Two Dead Cops’ very much addresses where you live. Can you walk us through the events that inspired it?

That’s based on a problem that America has, which is kind of a tough thing to explain to someone from outside there, but it’s rooted in an event that happened in Bed-Stuy where I live and work.

Two New York City police officers were killed by a guy who took revenge on behalf of multiple different Black people, men, in New York that were killed by cops and in a very short amount of time. It was a big point of news, not just in New York but in the whole of the U.S. and it was very sad and we all mourned it as a nation.

But there is a massive problem that cannot be ignored in America, and that is daily and routine brutal violence, often at the hands of law enforcement and often the victims being poor people of colour. It’s something that happens so often that it gets to be a bit abstract, and it gets to be hard to express emotionally and to mourn because of how routine it is.

Our president recently addressed the country after, I don’t even remember what gun tragedy it was, but he said that this was becoming routine and he was absolutely right— it is. ‘Two Dead Cops’ is my way of grieving this sort of violence that’s become characteristic of my country and it’s something that I find myself, just as I am now trying to explain as much to you, as to myself. It’s a very bizarre thing to bear witness to, especially at the rate that it happens.

What’s been the reception of this song from fans or even the general public?

I haven’t dealt with any direct criticism. I think I’ve been able to explain myself on it fairly well. I’m not in the habit of writing music that’s shocking for the sake of being shocking. I’m really not interested in that, I’m more interested in expressing myself honestly and I view that song as an honest expression of my anger and sadness. I did have someone email me – a police officer in Boston, Massachusetts – he hadn’t heard the song yet. He was a massive Parquet Courts fan and he said, ‘Do I have to stop being a Parquet Courts fan because of this song?’ and I said, ‘I don’t know. You really ought to just listen to it. You’re a cop – let me know how you feel.’ I haven’t heard back from him.

Berlin is another city that features on the record. Is there something particular about that city that influences the sense of loneliness in ‘Berlin Got Blurry’?

With that song, I think Berlin is less important – it’s in there because that’s where I wrote it. That’s the origin of this feeling, or that was the site where the feelings became apparent to me, but the main setting of the song is the lonely heart, and you can have that anywhere. It’s about feeling strange, and feeling alien, feeling like you don’t belong. And also just trying to run away from your problems, so it’s about being away from home and knowing that you have a reckoning when you do get home. It’s less about Berlin than it is about all those things. Just so happens to have been written in Berlin, and I wanted to put this site specific stamp on it.

The idea of ‘human performance’ really resonates with me. I’m gay and I’m always caught up in being the best version of me for others but also for myself. How do you navigate being a version of yourself that’s able to connect with others while also staying true to yourself?

There are so many different ways that we express ourselves and bring ourselves to other people and that could be argued I think cogently as a performance. It’s funny that you say that because I was reading this book, Confessions of a Mask by Yukio Mishima, where he describes his constant performance growing up secretly gay and in World War II era Japan. And it did make me think about ways that we always have to perform, be it to protect ourselves or to relate to somebody else.

I don’t think ‘performance’ is necessarily synonymous with artifice. There’s a spectrum that all our performances lie on. And sometimes it’s neither one nor the other, but many times it is necessary.

When I was writing Human Performance – the song, the record – there were a lot of questions about humanity and the way that I experienced it, and the way that I projected it onto other people and the consequences of that, and how that was interpreted. Did that affect people negatively? Many times it did, sure. But that record and that song, like a lot of my songs, are pointed at myself because I don’t really feel comfortable pointing myself outward too often. Glass houses and whatnot. It’s kind of a self examination of my own humanity.

When did you realise you were able to share that publicly?

Probably a lot later than I should have.

Human Performance is out now through Rough Trade Records/Remote Control. 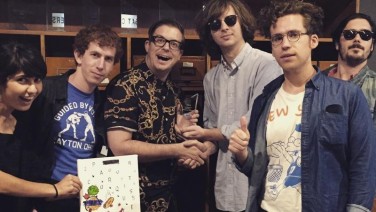 Parkay Quartz really don't care how you spell it. The New York-via-Texas band brought in an all-Australian collection of tunes to share on Arvos with Chris Twite - including The Stevens, Total Control and the mysterious Nicky Crane. 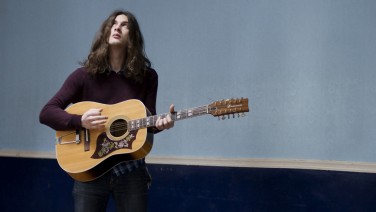 Spirituality and the art of cooperation: finding Kurt Vile's groove 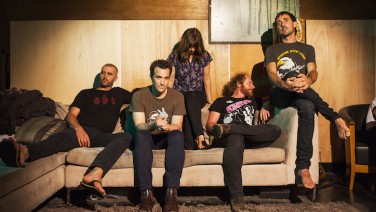 The Drones Interview: The Rules of Time Travel & The End Of The World

"Going back in time is forbidden by Stephen Hawking and a whole bunch of other guys." Dan and Gareth from The Drones share their seemingly deep knowledge of time travel, ethics and their new album with Darren Lesaguis.