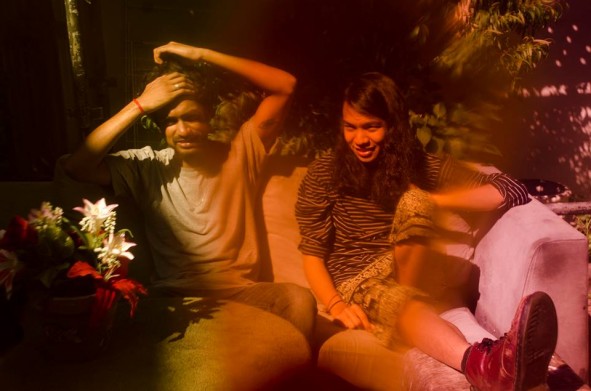 Young Spice grew out of a month-long collaboration in a beachside shed, which doesn’t seem very surprising once you listen to the music. Steadily flowing from each beat to the next with organised but imperfect rhythm, it’s a calm but danceable version of house music from these two young Melbournians.

Sandro Dallarmi :: Your SoundCloud page says that you guys are based in different cities. Do you get together and make music IRL or is it all online?

Young Spice :: We are not actually based in different cities. We have lived in the same neighbourhood since we started making music, which was at the start of this year. Leon’s here (originally from Singapore) studying the same course as me at Uni. We make music either at his house or mine in North Melbourne. Its good because a lot of our other friends also live around us and collaborations happen all the time. We kinda just make music where ever we go. Over the last summer we hung out at the beach in a shed and wrote music for about a month to see what we could make while listening to records every day and going to the beach with our friends. I think this solidified our collaboration as one where we could be comfortable enough to throw even the wackest ideas at each other but know that it could be turned into something solid. I think we both find it helpful to have someone to bounce ideas with.

What’s the scene like down in Melbourne for the more mature, less in-your-face house music you guys are making?

I don’t really feel like we are part of any scene yet. I go to clubs with my friends and I see the scenes that exist and a lot of them have been a part of it for long time and we are quite new to the game so to speak. But I guess its not really that important at this point for us because we see it as an ongoing collaboration and project that will evolve until it becomes something that will hopefully get people interested. A lot of our mates are kinda in a similar place and we are all learning and growing this stuff together and from there we just transmit these ideas to the web. Who knows maybe we will all put out something more tangible in future. As far as the scene goes and in terms of dance music in Melbourne, I can’t not mention those involved with Melbourne Deepcast, Voyage Recordings, This Thing, Butter Sessions and Animals Dancing who are some of the key players who have been releasing dope shit for a while now.

Have you two always been passionate about that type of music? Do you see yourselves sticking with that sound into the future?

I grew up in the outer suburbs of Melbourne amongst my Sri Lankan family and friends, where the older kids listened to Biggie and 2pac, east coast/ west coast type of stuff along with RnB. It was a pretty mainstream selection, but eventually it got me really into hip hop as a whole and dance music was introduced to me eventually. I never really thought make we’d be making this kind of music because I was busy playing in a band during most of high school while living in Ballarat, another part of my musical life that taught me a lot. But its something that both Leon and I got really involved in as a thing to do in our spare time.

Since the start of the year I think we have made over hundred tracks, some that eventually poke their head out as something worth putting out and others that we can pull out when we are out of ideas. I feel like along the way the process will lead to a more homogenous sound that we can call our own. The great part about doing this is that a lot of it is left up to chance and in those moments the rawness and mistakes can often become a surprise element that can give a special feeling to the track. At the moment we have a few hip hop style mix tapes that are on the burner as well as some A-B side house tracks that we hope to release on a more tangible medium. It’s definitely a labour of love type of thing and I think it’s going to through changes but you can always know that we will try to put our own flavour and feeling into it because that is important.

Fade Up Mixtape #45 :: Young Spice by Fade Up on Mixcloud