Dallas Woods chats about the pull of hip hop, Chapter One and mum. 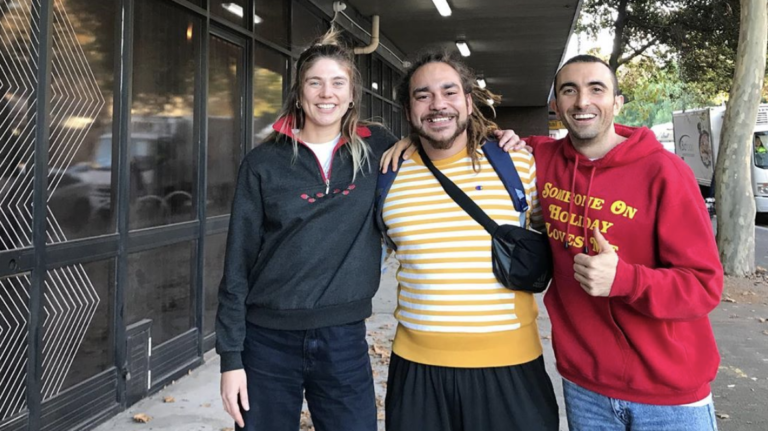 Coming off a spate of festivals and a tour with Baker Boy, Dallas Woods, East Kimberley’s wayward hip hop bombshell popped into Arvos this week with Grace and Al.

Known for his uncanny ability to fuse humour and wit with unlikely themes of poverty and abuse, Dallas Woods uses hip hop as a platform for storytelling  and advocacy as much he does self expression. He told Al and Grace that although US hip hop speaks to different themes than what he grew up with, he resonated with the genre from a young age.

“In the communities, hip hop is a big thing. So, you know, we see our big Uncles, big cousins, big brothers and stuff, they’re always listening to hip hop, and there’s a lot of reasons we listen to it… We might not relate to the shootings and all the robbing and stuff but the struggle, the hassle, family first, you represent your community, your town, your city in other words, and we just love the feel.”

Dallas Woods was picked by Indigenous Hip Hop Projects (IHHP) in 2007; opening doors for his hip hop career and touring the Kimberley with the group. On Arvos, Dallas attributed his time with IHHP to his mother, who generously lent her car to the group for two weeks so they’d have space to take him.

“I’m blessed to have a mum like mine. Real OG. She just knew pretty much that it was a swing and miss, like it could either be my way out or it could be ‘at least I got the opportunity,’ you know? … My mum took a big risk, and 11 years later here I am so thank you mumma.”

Catch the rest of Dallas Woods’ chat with Al and Grace up top. He talked about advocacy, his Walkman and his latest single Chapter One.