Black Country, New Road’s Charlie Wayne on ‘Ants from Up There’, New Sounds and New Beginnings 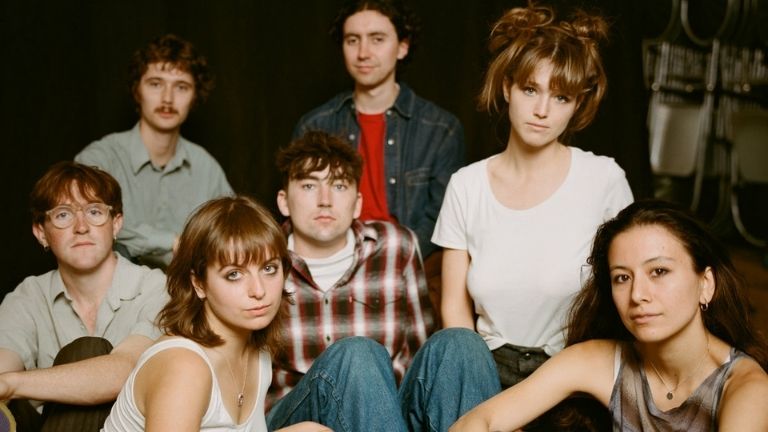 English post-punk-meets-folk group Black Country, New Road have treated the world to their sophomore album ‘Ants from Up There’. Calling it a romp feels inept given the record’s sonic intensity, but we’ll stick with it. A personal offering steeped in a harsh playfulness. The group’s drummer Charlie Wayne caught up with Maia Bilyk on Mornings to discuss the new album’s success, the band’s formation, and what’s on the horizon for Black Country, New Road.

You don’t often come across bands with as many members as Black Country, New Road. An even less common occurrence is seven talented and musically educated individuals joining forces. But alas, sometimes the stars align and they’re all in the one place at the same time.

“Cambridge is small, and if you like the same kind of music you find each other pretty quickly and we sort of found one another. I was in the year below everyone and they were all sort of in a notoriously cool group of people that were sort of like impenetrable, but because I could play the drums and people could come and practice at my house, my mum sort of didn’t mind, there was kind of like an easy way in.”

The now six-piece describe themselves as ever-changing; exemplified by the recent departure of lead vocalist Isaac Woods.

Forming in 2018 and releasing their first singles in 2019 saw a meteoric rise to fame for Black Country, New Road. Being thrust into the spotlight just before a global pandemic doesn’t seem like an ideal start, however Charlie and the band see a silver lining.

“Sunglasses. When we released that song and people all over, over in Australia were listening to it. I was like, ‘Ooh that’s kind of nuts, that’s not correct or normal, that needs more time’. It has been a pretty crazy couple of years but it’s been nicely and very neatly broken up by a global pandemic that has put a pin in things.”

The process of creating their second album ‘Ants from Up There’ has been starkly different to that of their aptly titled debut ‘For the First Time’. Charlie described the first album as putting together songs in order to have a live set. Their second was a more conceptual process.

“The first album was always kind of transitory, there was never anything that felt particularly definitive about it because it was entirely dictated by the group as it was as it was just starting. As soon as we put it out we were like, that’s it, there’s a pin in that, we want to go and do something new.”

The band have not lost sight of their debut album’s importance however. Charlie spoke on it’s role in getting them to a place where they could create ‘Ants from Up There’

“With the second album there was definitely an air of kinda confidence there because we knew we’d found a voice and felt more established. I don’t think we could have written any of the tracks really… without putting out that first album, that first kind of statement.”

The band now has two albums in the world that differ both sonically and conceptually. Charlie emphasised that change and difference are an integral aspect of Black Country, New Road. Isaac Woods’ absence moving forward speaks to this.

“It’s ironic, I know that Isaac has obviously left the band, it is sort of easy to say it in post, but he was never sort of going to be the lead singer on the next album anyway. We’d spoken about it before and I think that was the one thing that we all thought could be a really interesting change in whatever project we did next, which was to change the voice.”

“Doing the same thing twice is so boring, it’s ridiculously boring. Especially when you’ve got so many people in the band and everyone in the band is really grounded by the music we are playing with one another and everyone has come from very creative backgrounds and had the privilege of quite extensive musical education.”

Promise of a new voice and evolving sound is an exciting prospect. Maia quizzed Charlie on what else might be on the horizon. She got an inside scoop that they’re working on an adaption of the musical West Side Story with fellow UK band Black Midi. With an exciting new album to listen to and new Music (and potentially Musicals) down the line, Black Country, New Road are showing no signs of slowing down.

Listen to ‘Ants From Up There’ below.