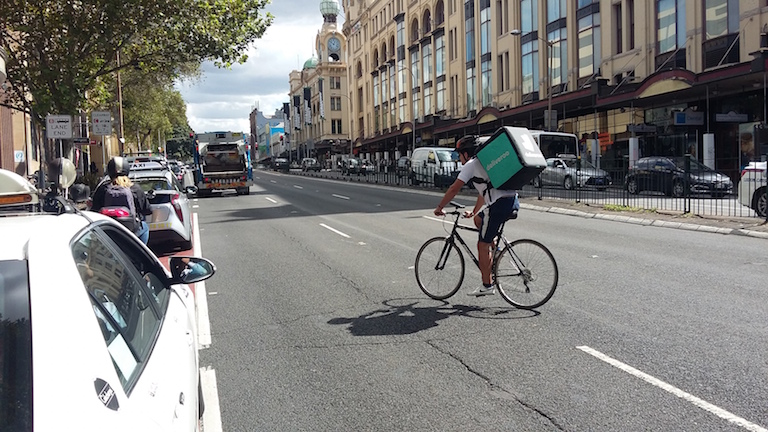 Deliveroo promises its riders dollarydoos, shift flexibility and toned quads in exchange for couriering food to the app’s users. But the job doesn’t let its cyclists ride into the sunset like it would seem. Realistically, they’re still cycling well after it sets.

As a consumer, who doesn’t love a cheap Uber ride home after a night out, followed by a cheeky home food delivery? But it might be time to stop and question how convenient, low-cost services and the ‘gig economy’ add up for the people on the other side of the screen.

What is a gig economy?

The outlook for the future of the workforce doesn’t inspire confidence. Overcoming the challenges of unemployment and unfair working conditions seems to be a never-ending feat. We’ve seen large companies like 7/11 underpaying and overworking its staff – many of whom didn’t have the language skills or knowledge of their rights to stand up for themselves. The ABS February 2017 Jobs report shows a rise in youth unemployment. 13.3% of people aged 15 – 24 who have entered the labour force are now without jobs.

Companies like Uber, Deliveroo & Foodora are examples of digital platforms that allow businesses to connect to freelance workers or ‘sole traders’ to provide on-demand goods and services. The McKinsey Global Institute Report predicts by 2050, these “online talent platforms” could increase the GDP of the global economy by up to $2.7 trillion. They say it will allow young people to make informed prospective career choices because the demand for goods and services is more easily tracked. By this point, 540 million people could be using these platforms.

The emergence of this ‘gig economy’ should be the light at the end of the tunnel – but is it just an illusion for those who are hungry and desperate to see themselves out?

At the end of 2016, Deliveroo riders in London went on strike to protest the proposed overhaul of the wage structure that would pay a higher ‘per delivery’ rate instead of an hourly rate plus the per delivery rate.

In Sydney, one rider who ‘invoiced’ the business for 80 hours of work for the fortnight earned just over $1200. That’s $14.50 an hour. Like all other riders, they were required to pay an initial $220 deposit for the jacket and bag ‘kit’, and deduct 5% of earnings as a fee for app usage, administration and public liability insurance. The public liability insurance doesn’t cover the rider themselves, it only covers third party/property damages.

To make a substantial hourly rate, riders should be aiming to complete three or four deliveries, but this is often dependent on demand and distance between each delivery. Deliveroo offers ‘shifts’ which are times where the rider is guaranteed an hourly rate of $18, but these cases only ever last an hour or two. However, Fair Work’s Award rate for a bicycle courier enforces that a shift must be a minimum of four hours, paid at $23.44 per hour plus penalties on Saturday and Sunday.

In stark contrast to being short-changed, Deliveroo saves money by not ’employing’ its riders but working with them, meaning the business is not required to pay out superannuation, holiday leave, penalty rates or work cover. The business was started up by a trader from Wall Street and is now valued at $1BN. National Treasurer of the Transport Worker’s Union, Tony Sheldon, believes that there is a power imbalance between the business and its ‘giggers’, where the line of rights has been blurred.

“Flexibility is usually language for the employers ripping you off… People take on work because that’s the work available. It doesn’t mean they want to be ripped off and treated like rubbish.”

“A lot of these gig operators, the cowboys, are out to make a hell of a lot of money out of changing what are basic human rights in the work place. And there’s no doubt that, you know, to get Deliveroo & Foodora & Uber to look at workers’ rights, if we simply wait for government – it will never happen. People have to stand together and stand up.”

“You don’t have to go to work every day at fixed hours.”

“It satisfies me right now because I know that I cannot find better work right now but I think we deserve more.”

“Sometimes it can be really exhausting, especially when it’s raining.”

The ‘sole traders’ and ‘freelancers’ riding under Deliveroo tend to be those who are looking for a bit of extra pocket money. But there is an increasing number of workers who fall into the demographic of newly arrived migrants or international students who rely on the work as a sole source of income. Working the job is a necessity because they have limited or no skills across the board, or are restricted by the number of working hours on their visas.

Deliveroo becomes an attractive solution because – following the model of working with the business, not for the business – there are no rigorous checks to ensure riders have legal working rights. Many of the riders are aware of the risk this loophole carries for their future, with the possibility of visa cancellation, detention, deportation, or being banned from re-entering the country for 3 years. Aside from that, they are also gambling their physical safety by engaging in erratic riding and ignoring road rules to ensure they can earn a living.

On top of the concerns to their wellbeing, riders are also losing out on money by having to provide and invest in their own bikes, helmets and lights to perform the job efficiently in the first place.

“I feel insecure because you need to have really good light and things like that because people don’t see you.”

“This is a question of making sure people aren’t taking extra risk because of low compensation rates and low payment rates. Underpayment means people take riskier behaviour so they can try and make sure they earn a living.”

Yet for some, the gig economy’s risks are trumped by its advantages: flexibility and income that many riders need to survive. But does the industry needs stricter regulation to pave the way to fairer working conditions?

HEAR THE FULL STORY ON BACKCHAT:

This story starts at 21:45. Audio story by Liam O’Donoghue.