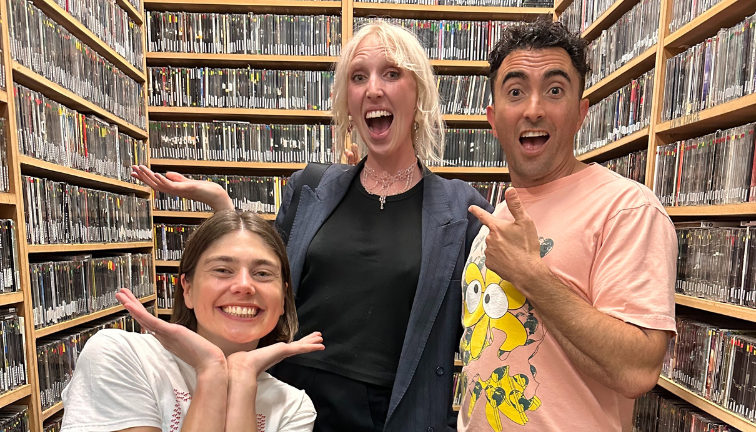 Detailing a tumultuous time in the singer’s life, Brighter Side of Blue is a record that deals with loss, heartbreak but ultimately immense personal growth. Recorded in the twilight of 2021, Babitha explained the experience of sitting with these songs made room for their meaning to change over time.

“To have all that time in between finishing it off and getting it ready and waiting… you get a bit bored, but having that nice little bit of breathing room I can look back on it and feel proud of it. Much closer to the completion of it I was much more critical and scared and all of those silly emotions that come with putting yourself out there in the world.”

Recorded at Stranded Studios in Bellambi over the course of 11 days, Brighter Side of Blue features an incredible lineup of friends, collaborators and ‘cardinal sinners’. Cecil Coleman (Body Type) on drums, Russell Fitzgibbon (Skeleten) on bass plus Jy-Perry Banks recorded pedal steel. Jordan Ireland (The Middle East) on viola and keyboard, Marcus Gordon (Spookyland), sister Isobella Grist (The Blamers), and Doug Wright of (Hed Ardennes and Fishing) to name a few.

“It was absolute bliss… It was nice and easy. We didn’t even have one fight. I was kind of like hoping for a bit of drama; you hear about all of these bands and all this drama that comes out of it but no, no drama. Too many nice people, boring!”

Lyrically, Brighter Side of Blue contains endless nuggets of wisdom. Like a conversation with an old friend, the record’s honesty and relatability will hook you in with every listen. Speaking on the painfully universal favourite line from ‘Happy Person’, “I tried to be the bigger person, but I hope to God your car won’t start,” Babitha let Grace and Al in on her most profitable lyrical moments.

“Most of them are just from life experiences… When I’m walking and driving [those are] my lyrically profitable moments. But songs like that you’re in the moment, you know break up times, they’re full of all of that inspiration. I wanted to make a song that encapsulated that feeling of trying to win but you’re also flawed and we can all be flawed and we are all just trying to be happy and we can have grace in that from both sides.”

At times a realist and others a romanticist, Babitha weaves real life experience into her songs as a way to find grace in disparaging situations. On the single ‘Night and Day’, Al pried into the relationship with her upstairs neighbour that the track was written about.

“Every Time I played music she would bang the floorboards. It was really horrible. It’s like, ‘B***h I’m writing a song!’ I was really struggling for lyrics and I thought, ‘Ok I’m going to take my current situation and romanticise it.’ So I had this beautiful thing where we were looking out for each other. Maybe it was my way of disconnecting from my actual reality of her bashing on the floor every night.”

Babitha has earned herself a diverse and loyal fan base, including the person who put her 2021 single ‘The Clown’ on the playlist at her local Bunnings. Grace and Al asked what other pinch me moments have happened in her career.

“Someone was crying on the treadmill, and I’m just so flattered! To facilitate a public cry but also in a gym? I never thought I’d accomplish that.”

Want to hear more pinch me moments from Babitha? Listen to the full interview on Friday Arvos up top! You can also hear Brighter side of Blue by streaming it below, or catching it live. Here are the deets: