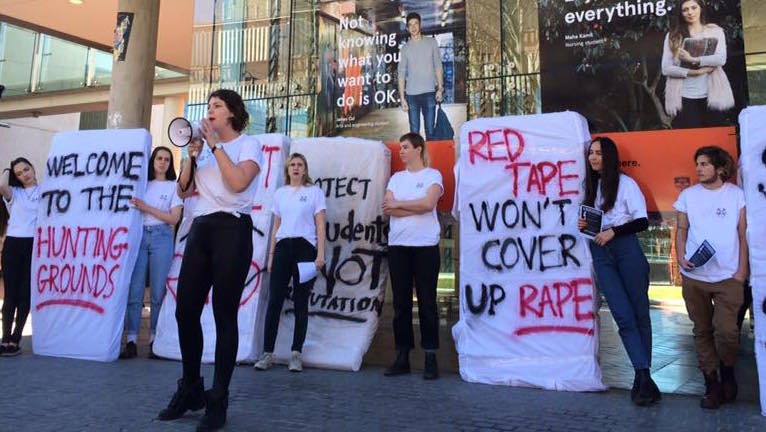 A $55 fine, eight hours of community service, a letter of apology: minor punishments enforced by universities for minor misdemeanours on campus. That’s if you consider sexual assault and harassment to be a minor misdemeanour.

O-Week is officially over and the onslaught of the academic season has begun. For most students the biggest quandary will be navigating to the closest coffee stand in between tutorials, but there are others who will be forced to stumble through a space that is far beyond their comfort zone: the “red zone”.

The red zone marks the beginning of the university year when social events are held across campus and results in a spike of sexual assault and harassment incidents. Helpline services, such as Rape and Domestic Violence Services Australia, have disclosed that there is an increase in the number of calls from female victims seeking support during this time period.

Over the past year, there have been incidents of sexual misconduct and inappropriate behaviour across some of the most prestigious residential colleges – including UNSW Phillip Baxter’s rape chants, and University of Sydney Wesley’s College “slut-shaming” journal. These incidents have sparked conversation over the policies universities have in place to protect their students.

Advocacy group End Rape On Campus have collated information and statistics from the past five years in a report called Connecting the Dots. They found that there have been over 570 complaints of sexual assault and harassments made to universities, but of these complaints, only six of the cases resulted in the expulsion of the perpetrator.

Nina Funnell co-authored the report. She’s an advocate for sexual assault and prevention and Australian Human Rights Commission Community (Individual) 2010 winner, about her personal experience of assault and why the issue is still the monster under the bed.

“It’s not even close to zero tolerance. On the one hand unis are saying publicly that they take this issue seriously, that they have zero tolerance, that they support survivors. But we know that that’s actually not the case.”

Catherine Lumby, a professor at Macquarie University and board member of Rape and Domestic Violence Services Australia, was Nina’s Honours supervisor. She stresses that these kind of assaults affect the mental health of a student as well as their ability to effectively participate in campus life.

“There is widespread denial in our society about the extent of sexual assault. I think that what’s happening in universities is a reflection of broader society.”

She believes policies need to provide students with appropriate support systems instead of minimising their experiences in oppressive policies. Connecting The Dots found that university policies may be deterring victims from coming forward. Policies include a 20 day time limit to report the incident or informally mediating and resolving the matter.

“Universities have tended to frame sexual violence within their communities as an individual problem that requires a police response… Nobody wants a University to be known as the one where all the rapes happen, so it’s just easier if they can turn around and make it someone else’s problem.”

In September 2016, as part of the Respect. Now. Always. campaign, the Australian Human Rights Commission launched a survey across 39 universities in Australia, encouraging students to submit their responses about the nature, prevalence and reporting of sexual assault on campus. The report will be released later this year with clear data to investigate the effectiveness of services and policies that are in place and to provide recommendations to further the support given.

Sharna Bremna, founder of End Rape on Campus, has said that universities have responded positively to Connecting The Dots, but the extent to which the recommendations are enforced is  yet to be seen.

“People are listening to students when they’re saying we want safer campuses. The general public is now more aware of these issues than they were in the past and so I’m hoping that what we’ll see is more pressure put on unis to actually take note and to improve student safety.”

Backchat reached out to several universities for comment on the issue. Only two responded.

A spokesperson for the University of Sydney said:

“The University of Sydney undertook and has acted on the findings of a comprehensive review of complaints handling. Following feedback from students last year, a variety of mechanisms have been put in place to ensure that students can immediately avail themselves of a confidential conversation with an appropriate trained staff member and access a range of other vital support resources and services.

“All members of the Student Affairs unit and the University’s Counselling and Psychological Services (CAPS) team have undergone professional training, including training provided by Rape & Domestic Violence Services Australia.

“The University is implementing a new helpline service for students in 2017 to improve the way we deal with cases of sexual harassment and assault, in particular the process of reporting, which was as a key concern following the Creating Safer Community For All survey.”

A spokesperson for Macquarie University said:

“Macquarie University is committed to providing a work and study environment underpinned by values of dignity, respect and inclusion free from all forms of harassment and assault, including sexual assault. Violence of any kind is not tolerated anywhere on our campus and the safety and welfare of our students and staff remains our number one priority.”

Hear the full story on Backchat: