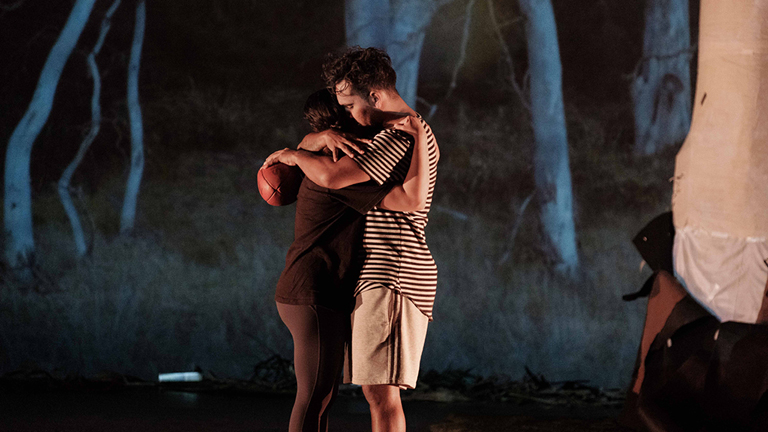 The Man with the Iron Neck is a physical theatre piece about legacies of Indigenous suicide and of pushing on. It is written by Ursula Yovich, directed by Josh Bond and Gavin Robins, and presented by Legs on the Wall.

It was opened by Aboriginal Elder, Yvonne Weldon, chairperson of the Metropolitan Local Aboriginal Land Council with the tragic fact, soberly stated, that between January 8 and 18, five Indigenous girls younger than fifteen took their own lives. Silence clung to the air of the Opera House’s Drama Theatre. The statistic of losing so many children so young felt to me a silent spear, its point confronting us all.

Speaking next was David Cole, founder of the Balunu Foundation, which reaches out to at-risk youth. Each audience member also received a booklet in which they could write what keeps them ticking and what they want to let go of. Here was a way to practice hope, informed by on-the-ground work with people at crisis point. 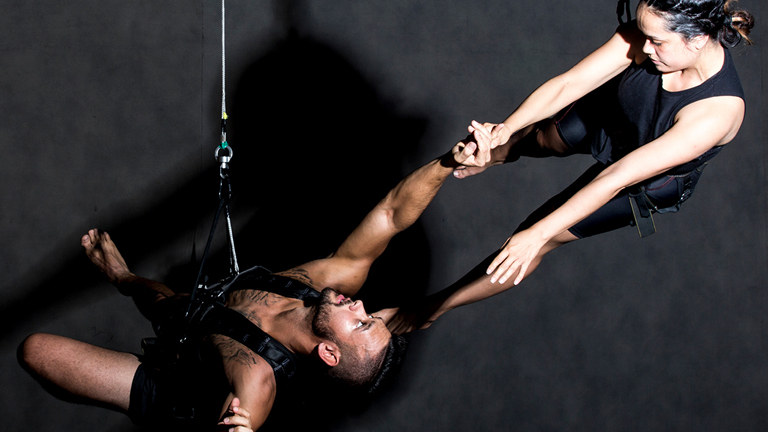 Then began the narrative proper. The Man with the Iron Neck follows a family of three: Mum Rose (Ursula Yovich), her twins, Bear (Kyle Shilling) and Evelyn (Caleena Sansbury), and their neighbour and Evelyn’s love interest, Ash (Tibian Wyles). Bear is a promising AFL hopeful and the talent scouts will be in town in three weeks. Ash, the next door neighbour, has been offered an Indigenous Access scholarship; Sydney is in his sights.

But legacies of suicide and trauma threaten to undermine these hard-won opportunities. Bear and Evelyn’s father, we find out, hanged himself from a tree in their backyard – the ghost gum on stage which towers above them posing the question: how do you run from such a legacy when it’s embedded into the landscape around you?

The set design (Joey Ruigrok), lighting design, (Matt Marshall), and video design (Sam James) were well-crafted, crucial storytelling elements from start to finish. The soundscape and video work evoked northern Australia with theatrical charm and rigor. Cicadas scratch their legs, buzzing. Birds sing, kookaburras laugh. The daughter sings while putting her washing out. We know that this is contemporary Australia. And that something more needs to be done. 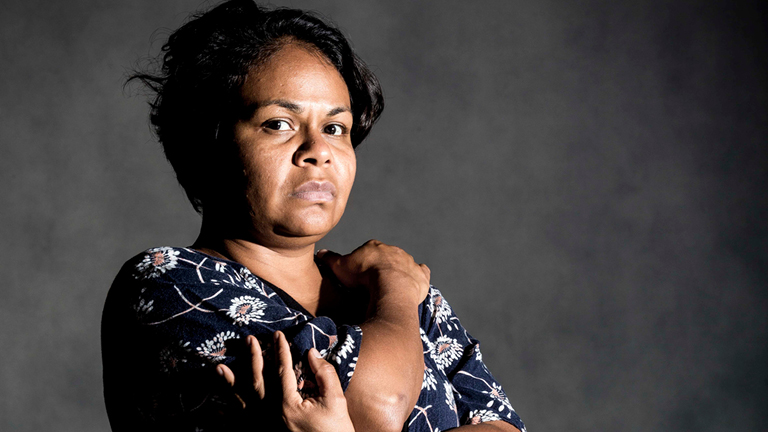 This piece’s message pierced me. It’s important that Australians reckon with the ongoing tragedy this work examines, as it challenges something deep in the heart of White Australia. As I write this, the final stanza of Judith Wright’s ‘At Cooloola’ rings in my ears. A NSW-born poet and Indigenous rights activist, Wright’s poetry gives some insight into white-blak relations in Australia and the demons that many white Australians avoid, haunted as they are by a landscape traumatised by their invasion.

And walking on clean sand among the prints
of bird and animal, I am challenged by a driftwood spear
thrust from the water; and, like my grandfather,
must quiet a heart accused by its own fear.

The Man with the Iron Neck is inspired by history but is inescapably about now. It records a story that will be written and rewritten unless there is a true commitment by all Australians to disrupt the tragic legacies it describes.

The Man with the Iron Neck has finished its Sydney run and can be seen at Adelaide Festival, March 1-17. Tickets available here 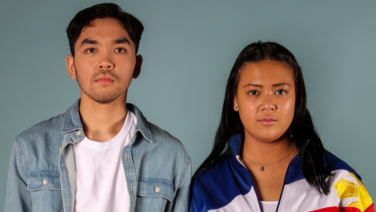