The Hanging: Not Niwe, Not Nieuw, Not Neu 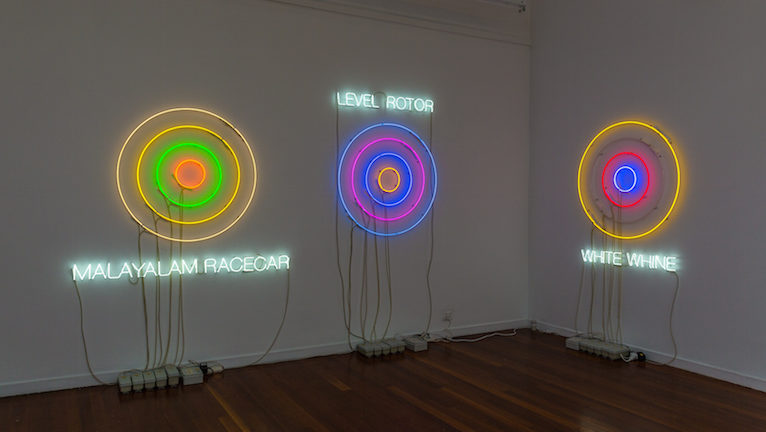 It almost feels like a visit to a small scale museum of natural history, that’s if the museum was also staging gut-wrenching irony.

This month, 4a Centre for Contemporary Asian Art is rethinking Australian history by digging straight to the roots of European settlement. ‘Not Niwe, Not Nieuw, Not Neu’ sees artists from Australia and New Zealand come together to reclaim ideas of Indigenous heritage, ecology and land by reviewing history as it were recorded post European settlement.

Entering the building, Newell Harry greets you with a whole lot of colour and text as he examines the crossover between power and language through art. Featuring glowing neon words and targets on the wall, the piece feels oddly disparate upon first inspection. What Newell wants you to think about is, that with little to no instruction, you’re forced to assume meaning and to assign it without consent or permission. More importantly, is this act right or wrong? Has this land’s history been recorded as such?

This more or less gives you a tangible premise for the show. Newell’s work pushes you in to a space of critical thinking, which is to be affirmed by subtle to’s and fro’s of commentary woven through the other artworks that await you. There’s taxidermy sparrows, paintings of Captain Cook, sacred objects of Maori heritage, and printed images of botanists at work are reflected onto mirrors. The key is to pick apart the elements of the work that might disrupt the initial image at play. 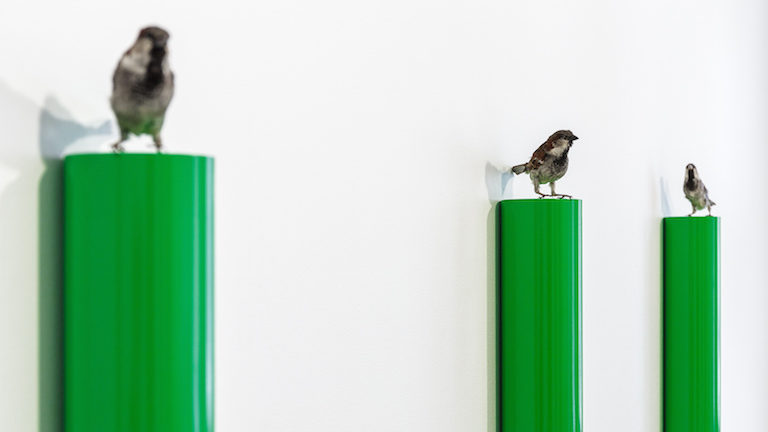 Daniel Boyd’s paintings are inscribed with bold letters spelling “no beard,” which adds the dialogue of Indigenous Australians. This almost reimagines the image of Captain Cook to be this mocked subject of study, rather than this champion of Western expansion.

In a similar method of reworking, docile and harmless sparrows are at second glance all named after American handguns. Here, Michael Parekohwai treats these creatures as a sanctioned threat. They remind us of the detriments embodied by forced ecologies, as the sparrow was historically introduced to New Zealand by European settlers, and became a massive burden to the existing environment.

Tying these works together are James Tylor’s photographs that seem so fragile and delicate even just to stare at. The mirrors inhibit these white prints of early botanists intervening with Australia’s landscape and plant life, creating a beautiful but melancholy retrospective on such detrimental practices that have led to the advanced civilisation we live in today. Through the literal reflection of mirrors, you are inevitably part of it.

Be prepared to reconsider some unquestioned truths that need destabilising.

In the Shade, MCA Artbar online, Connected to the land & more! Culture guide on-air every weekday at 4:30pm

More from The Hanging

Balik Bayan is a group exhibition at Blacktown Arts Centre celebrating contemporary Filipino arts and culture. Each artist draws on their personal history and culture to create works that straddle Filipino ethnicity and their Australian nationality.

The Hanging: Shadows are cast by things and people

Putting together the pieces at the Australian Centre for Photography's latest exhibition.

A site of early contact between colonists and Indigenous Australians, Observatory Hill reverberates with ideas of history, land and culture for Anri Sala's 'The Last Resort'.