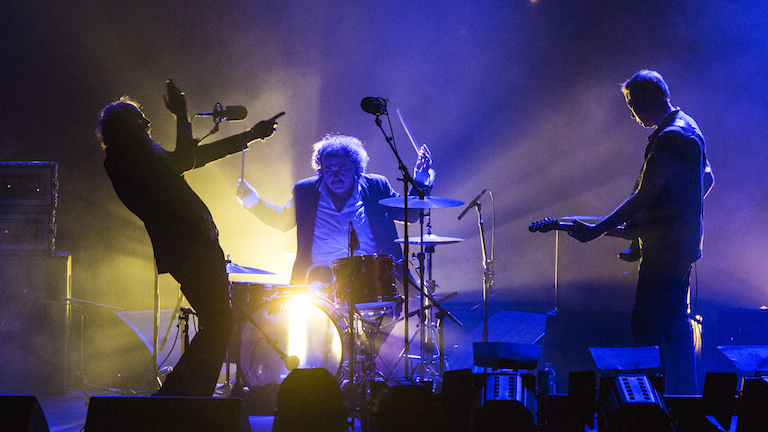 A famous rock critic once observed that in the right place and at the right time, just about any band could become – maybe just briefly, but totally – the centre of your universe.

For just an hour or two they could be – to you and others – the greatest band that has ever existed on any planet in any universe.

On Friday night for me and 2000 other people, Dirty Three were that band. And then some.

Whilst I had listened reasonably obsessively to Dirty Three since the mid 1990s, I had somehow managed to miss ever seeing them live. I’d seen drummer Jim White and guitarist Mick Turner some years ago with Bill Callahan at the Spiegeltent during a Sydney Festival, and of course I knew all about Warren Ellis through his work with Nick Cave, soundtracks and so forth. But the live Dirty Three experience had never been mine.

Unfortunately I missed most of opener Mirel Wagner as I was over at the Spiegeltent seeing as much of Matthew E. White as I possibly could, but that’s another story.

Just after 9pm, Dirty Three ambled onstage with the casualness you’d expect at a local pub gig. They pottered around, tuned, ambled more, tuned – and then exploded with a glorious cacophony of sound that literally raised goosebumps on these arms that have experienced a real lot of great shows. For almost two hours they were simply thrilling.

A few observations: Warren Ellis is one funny guy. His between-song discourses were sublimely surreal and tangental. That he is a magnificent musician and showman doesn’t need repeating.

Mick Turner – the Thurston Moore of Dirty Three – is impassive throughout the show, effortlessly shredding crescendos of guitar chords in the most understated fashion.

And then there’s Jim White. I have never seen a more emotive, transfixing, versatile, intuitive drummer in my life. He looks like a middle-aged bar fly and plays like a man possessed – but with a casualness and ease that’s breathtaking.

There was simply nothing not to like about Dirty Three. With the three members scattered around the globe there’s a sense that shows from them will become an increasingly rare occurrence over the years. Me – I was so entranced that the next morning I woke and checked airfares to see if I could justify a flight to Melbourne to see them again at the Sugar Mountain Festival. I’m still seriously thinking about it.

And you know the other thing I loved? Well I’m going to tell you anyway. With the exception of a few brief flickers, there was barely a flickering phone in sight for the whole show.

This was 2000 people gathering to see something spectacular. An audience totally into the moment, not distracted enough to be clicking away and taking dozens of blurry photos they’ll never actually look at again once they’ve socially networked them to show their friends. This was time, place, moment. No need for souvenir photos. For two hours, Dirty Three were the greatest band on any planet in any universe.