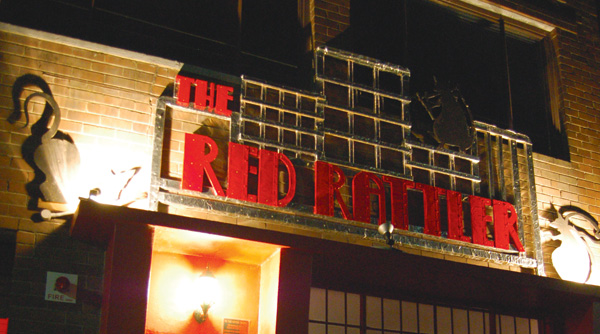 Red Rattler trains were famous in the sixties – they were noisy, made clackety-clank noises on the tracks and had beautiful, big, and open carriages with an inviting atmosphere.

They were a new kind of diesel locomotive that were much different to the steam train that preceded them that were faulty and unpredictable.

A warehouse venue in Sydney’s inner-west of the same name takes inspiration from these heralds of the past – liberated, forward thinking, noisy, and a shake up from your ordinary scene. This is The Red Rattler Theatre in a few words.

The Rat isn’t located in the most savoury of places, but what it lacks in pretty facades it makes up for in a uniquely creative space. Hidden in the industrial centre of the inner-west, The Red Rattler Theatre plays host to anything from performance artists, to burlesque dancers, to political debates, to brilliant local music.

The warehouse scene of the eighties and nineties has been reinvigorated in Sydney; but not only do the owners of these venues need the creative vision to host these parties, they also need the stamina to sidestep politically motivated guidelines and overcome very restrictive legislation. In between all of this lies the anomaly that is The Rat – one of the only legal warehouse venues in Sydney. The Rattler’s brain trust consisted of five local artists, who began by hosting events at illegal venues in Sydney’s inner-city and inner-west. Unfortunately, these places were unable to overcome the boundaries of the law and were eventually shut down. In 2008, The Red Rattler as it stands today was created – lawful and accessible holding all the relevant licenses to stay open.

It functions as a non-for-profit organisation with the help of volunteers. From the management to the bar; it’s run by people united by their love of the Rat’s effortless derelict chic.

At the start of this year, two of the founding members of the venue decided to sell their shares which left the 40% of the building that could go to anyone with a lot of money. It’s an expensive thing to invest in – $40,000 would be enough to finalise the directors the loan to by the remainder of the shares and keep it functioning as they wanted it to.

The ‘Save the Rat’ campaign was launched earlier this year to do just that – Save the Red Rattler.

Thankfully, The Rat raised the funds in order to not shut down. But it’s still hanging by the skin of its teeth. With the Marrickville Council on side, voting towards supporting live music in Sydney, it’s now, more than ever, that this beloved venue needs to continue functioning.

Cue Honi Soit – a paper run by students with a little bit of Sydney University’s copious amounts of money behind them and an audience interested in good music, arts and culture. They’ve curated a Honi Soirée, which hosts a number of Australian musicians. The art of students will be displayed and projected on the night, and like every other event at The Rat, it’s coming together with the help of a number of volunteers. It’s $5 on the door and all proceeds are going to keeping this eclectic gemstone in Sydney to continue what it does best.

WHO :: Friendships, The Townhouses, Moon Holiday, Reckless Vagina, Mere Women, Bad Ezzy, and two USyd ‘up and comers’ Milkk and The Dharma.
WHEN :: Friday 9 August, 7pm
WHERE :: The Red Rattler Theatre – 6 Faversham Street, Marrickville
HOW MUCH :: $5 on the door 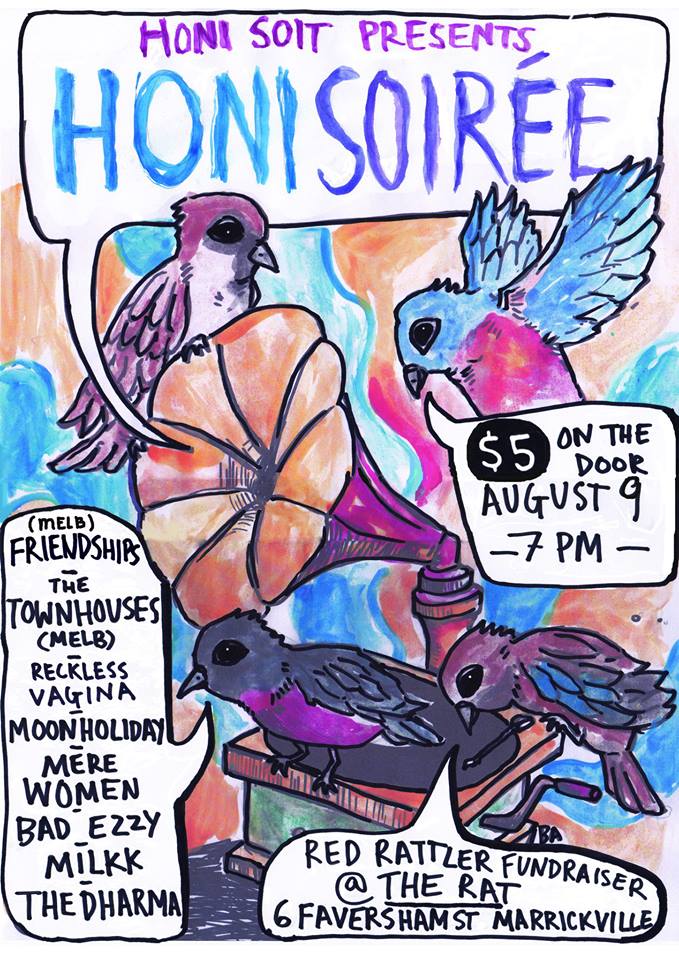