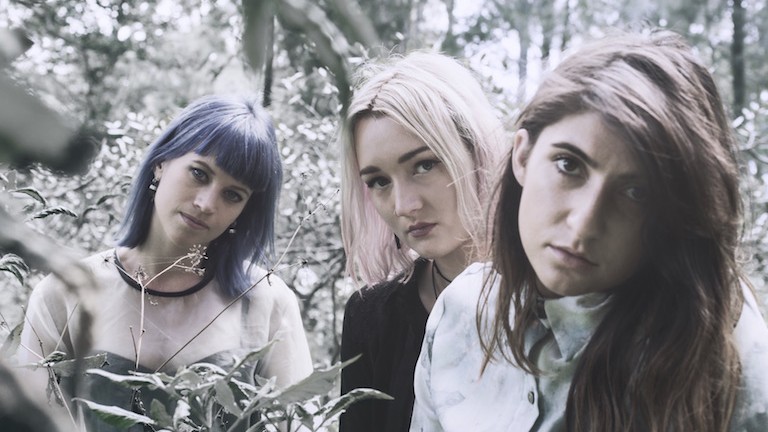 Little May dropped into the studio with Samantha Groth this week to share some of their favourite songs, along with two of their own. The Sydney trio released their album For The Company in 2015, which they recorded with The National’s Aaron Dessner in upstate New York.

During their visit to the US, the band recorded a haunting cover of ‘Skeleton’ by the Yeah Yeah Yeahs for Rookie Magazine, which features a cover by a different band each month. Little May give us a listen to the cover, kicking off a playlist of “very long sad songs” featuring artists like Cloud Control, The National and Aldous Harding, among others. They’re quite big fans of Aldous, having met her in the US and seen her “otherworldly” performance.

“[We] just really enjoy her as a person and her music,” they muse.

Hannah, Liz, and Annie are joined by their synth player Mark who introduces himself as “the boy” of the band.  It looks like he won’t have claim to that title for long, as they’re about to head out on tour with the help of Dorsal Fins bassist, Robert Muinos.  While he’s no longer the only boy, Mark is determined to keep his title as “funniest boy” in the band.

Little May are hitting the road with the support of young singer-songwriter E^st, from the Central Coast of NSW.  They’ll be playing a lot of music from their recent album and a few songs off their last EP.  There might even be some new material to be performed – if only they get around to writing it in time!

Listen to the guest program above for Little May’s playlist, including their track ‘Oh My My’ and their cover of ‘Skeleton’.

Dorsal Fins – Heart On The Floor

Little May – Oh My My

We let @littlemaymusic choose the tunes on Lunch today! Listen back to gems from The National, Aaron Dessner & Justin Vernon, @cloud_control, @aldousharding, @iameastofficial and more at fbiradio.com