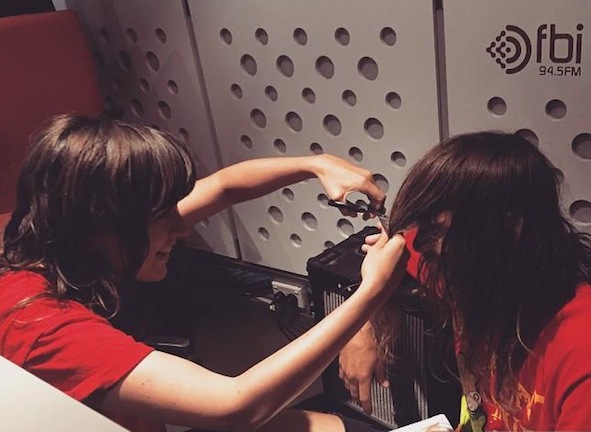 What happens when you hand over the radio to a bunch of local and international artists from the Laneway festival lineup?

Our own (very trusting) Arvos host, Amy Gibbs, relinquished control of the show on Monday to find out.

We kicked things off with the man in the hat, who collaborated with SBTRKT and swapped tracks with Kanye West – all before releasing a record. Raury specialises in a blend of rap, folk and soul, and played a couple of influential songs from the pioneers of the slow burner and auto-tune. Including some T Pain. Of course.

Angel Olsen brought her sultry tones next, treating us to her mellow track ‘Lights Out.’ A self-professed “granny” when it comes to new music, the lovely lady also chatted about rollerskating parties and her childhood ambitions of a 90’s R ‘n’ B gurl band.

We then gave the power to the Dune Rats, who hosted half an hour of bloody ripper radio. Shane from DZ Deathrays‘ lunch was covered in detail via an exclusive interview. The odds were in Courtney Barnett‘s favour as she cut Brett’s hair to look just like hers – the results were actually pretty freakin’ uncanny.

We caught up with Barnett about her Laneway experience, and had a quick chat with George Nicholas from Seekae – winners of the 2014 FBi SMAC Award for Best Song.

Gerett, William and Sam from Future Islands answered questions from you guys – from signing breast pumps to having their manhood manhandled.

And finally, Rustie and Nightwave went back to back live on the decks for a truly huge mix to top off this wild and very strange ride.

Would we do it again? Definitely.

** BRUSH WITH FAME: Check out canvases by Courtney Barnett, Dune Rats (with the hair, yep!), Future Islands and Rustie in our fundraiser auction here! **