Interview: Gold Class – on anger and putting it to good use 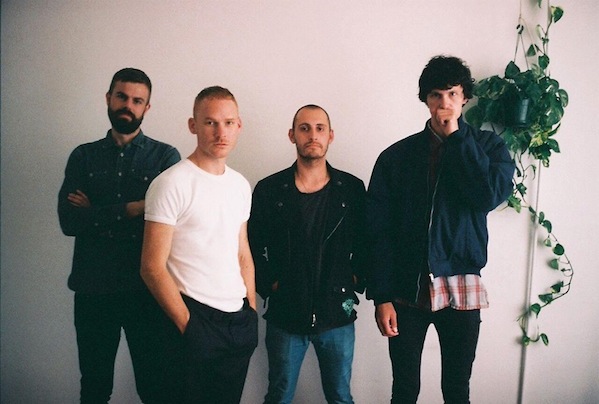 For their debut album It’s You, Gold Class had four days to record ten songs — simply put, “there wasn’t much time for fucking around.”

Throw in a bottle of whiskey and a dog running around the studio, and you can’t get much closer to the ideal recording environment for getting things done. Singer Adam Curley joined FBi’s Lucy Smith for an in-depth chat on all the ins and outs of the band’s progress and working with fellow artist Geoffrey O’Connor.

The post-punk four piece combine attacking rhythms and poignant lyrics with stark visual imagery, delivered by Curley’s deep vibrato vocals. Led by first single, “Life As A Gun”, the album deals with some pretty serious themes that Adam could pour his anger into constructively.

“I was pretty angry about what’s happening in this country and about how outsiders are created and treated.”

It’s You from Gold Class will be available from the 4th of September. Read the full interview below.

Lucy Smith: For those just jumping on board with Gold Class – could you tell us in a nutshell how it all started?

Adam Curley: We’d all known each other a while before we started jamming at the start of last year. Jon and Mark had played shows together in their other bands, Bone and Nth Wheel/Possible Humans; Evan, Jon and I were working in the same bar, and Evan, Mark and I were studying creative writing. Evan had a few guitar ideas he’d been working on and got everyone together in a room, but from there we really started from scratch with writing the songs together. There wasn’t any pressure to be a band; we were just playing around with ideas and it was an excuse to hang out.

The Gold Class project began and flourished quite quickly in mid-2014 – how do you feel your individual creative backgrounds contributed to you guys working as a band?

It’s hard to say, but I guess to some degree we assumed we were on the same page because we were hanging around the same people and seeing the same bands, and Evan and I knew Jon and Mark’s other bands. I was probably the least known quantity because no one had heard me sing, but Evan and I were talking about writing a lot – mostly short fiction for classes – so I think it was more a writing project for him when he asked me to put down some lyric ideas. And I think Evan had been writing stuff on his guitar for years and not playing it anywhere, or not playing much – he’s a crazy talented player and writer and is completely himself, maybe because he was working on it alone for so long.

You had the initial philosophy of writing your own parts with ‘reverence given to the whole’ – did you find you were each on the same page musically? How did this eventuate into a unanimous body of work?

Yeah, probably the one thing we talked about briefly was how we’d approach songwriting. I think we wrote a song in that first jam and it was obvious that we could write our own parts, and that appealed to us. It’s the thing that appeals to me most about being in a band at all, the idea that everyone is responsible for their own thing, or that one person’s idea leads to another idea. That’s the whole point to me. I think the other side of that is that because none of us are entirely new to this, we each like things the way we like them, so it’s going to sound like us regardless of whether it’s fast or slow or whatever. We’re possibly just really stubborn.

It’s You is a record of the band’s first period of songwriting together – what were some of the main themes you wanted to express?

Lyrically, at first I was just writing whatever came out, and to be honest I was having a pretty hard time when we started working on songs, and a lot of my friends were going through shit too, so it was just about that, just about struggling with stuff. But as we dug into the writing I realised I didn’t want to only write about that outsiderness; I was pretty angry about what’s happening in this country and about how outsiders are created and treated. You know, I didn’t want to internalise all that shit, I wanted to do something with it. So I tried to put some of the anger to use.

I wanted to say, call me a crank because I won’t shut up about this, and I wanted to own the pervert label for every queer who’s been arrested, and I wanted it to be a feminist album as much as it can be one, and I understand the limitations of that.

Could you tell me a bit about the album’s title It’s You?

I was pretty keen to have an album title that tied the songs together. I think the others would have been okay for the album to be self-titled but I pushed for it, maybe just because I like album titles. I suppose when I looked at the songs I realised they were all either about fighting against someone or protecting someone, and I liked the connotation of ‘It’s You’ as either an accusation or a kind of devotional statement.

You recorded ten songs in four days with producer Simon Grounds – overall what was that recording process like?

Simon’s approach to recording is no-fuss, you get to work and you go home when the work is done, and I think we’re a band that responds to that. He’s amazingly intuitive and we trusted him from the start. We had four days to record ten songs so there wasn’t much fucking around: three days for tracking and I did all my vocals in five or so hours on the last day. But we wrote the final piano song, ‘Shingles’, late on the third night. Evan had given me the piano part months before on a tape and I’d put some words down but we’d never played it, and then Jon and Mark improvised over the top. That was Jon’s birthday actually. We were drinking whiskey and his girlfriend’s dog Gracie was running around the studio.

The ‘Life as a Gun’ clip really embodies the emotional intensity of the lyrics – how much say did you have in the creative direction of the clip? How was it working with Geoffrey O’Connor?

Geoff is the best. We had an idea of what we wanted for the video generally but the knife-throwing concept came from him. But also Mark was overseas so we needed a video without the whole band in it. We filmed it on a friend’s rooftop in June and probably couldn’t have picked a colder time. I felt pretty bad for having asked our mate Eva to be in it, particularly when Geoff said he wanted to get night shots as well, but she owns that video.

Also, how was it having knives thrown at you?

Ha, is it that convincing?

You played your first Sydney show at Black Wire Records in December 2014 – now coming back for Volumes 2015. How has your live show developed?

We had a big break from playing shows after we recorded the album but I think it’s done us good. We were mostly playing shows like the one at Black Wire, with only a vocal PA, nothing else miked up, and now we’re mostly playing on proper stages so it’s a different thing altogether. We probably prefer the former because it’s more like how we jam, but it’s nice to be able to hear yourself too.

Can you name a song, from any artist, that you believe should be cranked at full volume?