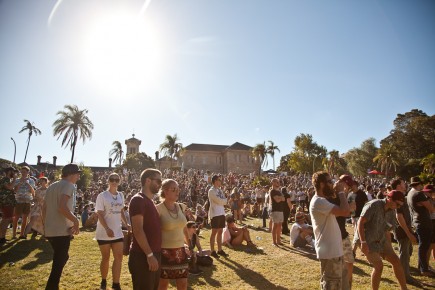 In its 11th year, St Jerome’s Laneway has proved that if there is an ideal formula to the perfect festival, they are doin’ it right.

With a lineup so on-par with the most groundbreaking acts currently shaping the musical landscape, amongst a beautiful setting like the Sydney College of Arts, you can’t go wrong.

Lucy Smith and Pat Dempsey both popped their Laneway cherries this year and, like many punters, tried to fit in as much as they could over the day amongst the various clashes. Here are some highlights of what was a bloody fantastic day.

(All photos by Yael Stempler – check out our full gallery here!)

2014 is looking to be the Year of the Festival for Sydney locals Jagwar Ma, with lineup slots announced at Field Day London, Primavera Festival and Coachella. The boys have kicked things off with Laneway and they killed it. The Sydney leg of the tour saw them hit the Redbull Music Academy Future Classic Stage at 5:10, lifting the usual afternoon lull.  They made their way through their release Howlin’ with ‘What Love’,  ‘Come Save Me’ and ‘Uncertainty’ definite crowd favourites. ‘Four’ was the one that got my pals and I booty shakin’ and beaming with its heavy bass synth ramping up the tight courtyard.

The lovely ladies from LA copped the brunt of the afternoon sun, with a topless Este expressing everyone’s thoughts with “It’s hot as fuck out here Sydney!” But the three sisters were stoked to be back and had us cheering for more with an electric set with ‘The Wire’, ‘Falling’ and ‘Forever’. The highlight came at the conclusion of the set, when the multi-talented sisters each took to a drum and banged out a fast paced, intense rhythm section in perfect unison. The dynamic jungle drumming gripped the crowd with each beat change, hair flick and “HEY!” between rests. Baby Haim’s jump into the crowd at the end had me wishing I’d pushed my way to the front. #girlcrush 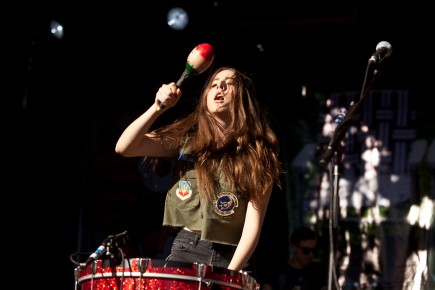 Before Lorde took to the Park Stage we were greeted by event promoter Danny Rogers and Leichardt Mayor Darcy Byrne. In the wake of the recent lockout and liquor licensing laws that came into effect last weekend, Byrne gave a heartfelt speech that well and truly stuck it to the man. You couldn’t help but feel proud with his proclamation that Laneway is a very welcome event “today and tomorrow”, and that live music was certainly not dead in this neck of the woods. Take that Mike.

As the sun was setting the Lorde was certainly with us. Off the back of two Grammy wins, Ella Yelich O’Connor had the crowd mesmerised with her convulsing movements and unique vocals. ‘Tennis Court’ had the masses grinding with each “YEAH” and Royals was an obvious crowd favourite. But I thoroughly enjoyed her mean Son Lux cover of ‘Easy’, her rapid movements on point with them haunting, baritone sax jolts. 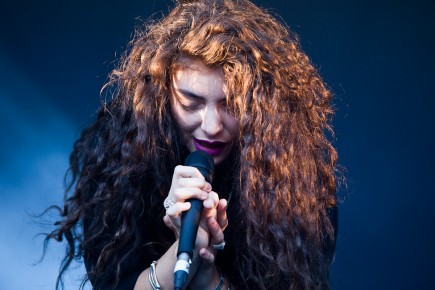 Sorry Haim, I’ve changed my mind. Heidi Lenffer is my new girl crush. This lady CAN work a tambourine. Lenffer revealed the bittersweet truth about Laneway – so many great bands, so little time – but thanked us for choosing to watch Cloud Control. I can honestly say there were no regrets here. At 8:25pm, the peak of the night saw the four-piece give an energetic set with each member absolutely chuffed to be there. Jeremy Kelshaw was so electrified he fell over amongst his rapid spinning as two sparklers, attached to Alister Wright’s guitar, lit up a stellar jam during ‘Island Living.’ There was never a dull moment, with the peak of the set being ‘Dojo Rising’ and ‘Scar’, before ending with the vintage favourite ‘There’s Nothing In The Water.’

5) Watching Kurt Vile from the hill

As a first time Laneway-er, I was pleasantly surprised at how great the sound of the Park and Garden stages were from the grassy hill. Sipping Bulmers in the sun with my precious people on the hill during Kurt Vile really captured the chill beauty of the day. Some shows are nicer from a distance and I really enjoyed sun-stroking to the nostalgic noise that Kurt was making. 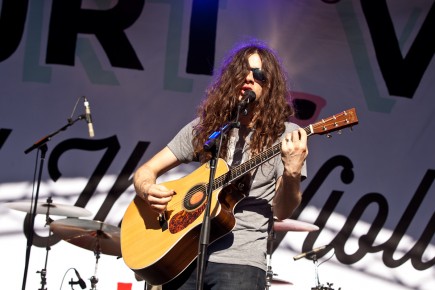 I didn’t know too much about Cashmere Cat before Laneway. However, chilling at the back of the Future Classic stage during his set, it didn’t take long for him to grab my attention. Two minutes in I was dancing like an octopus tripping out on seaweed in a storm. Funky and fresh, the Nordic disc-spinner presented a palette of tropical tuna. Definitely the surprise of the day and the most danceable show I had the pleasure of seeing.

Slinky beats and a silky sin spitting – basically, Earl Sweatshirt makes really good rap music and performed it really well on Sunday. Totally captivating in the flesh, Earl had me hooked with his alluring combination of cheekiness and seriously sparkling lyrical ability. You know a guy has the crowd on his side when he’s got the whole place chanting, “I’ll fuck the freckles off your face, bitch”.

Without a doubt, my musical highlight of the day. Danny Brown is more than a rapper, he’s a sex symbol, a fashion icon and most relevantly, a true performer. His sustained intensity was incredible; his presence, palpable. His vocal range and control absolutely blew me away – I’m pretty sure he is some kind of vocal acrobat. Also, a dude jumped on the stage at one point and then Danny wore his hat for a bit. 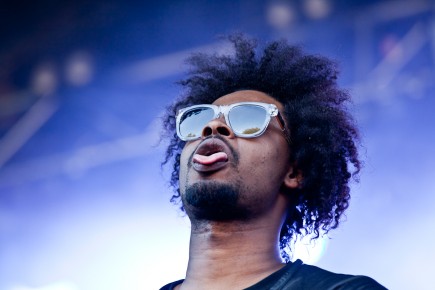 Of all the things that were most impressive about Laneway, the venue and its suitably to host a festival like this kept popping into my head throughout the day. The nooks and crannies of SCA provided plenty of places to hide – and the grass, plenty of places to lie and slide into a haze of pleasantness. The sandstone, the tall trees, the lovely old architecture – it all contributed to what was a beautiful backdrop to a great lineup. I’d gladly return next year and will probably just go and walk around the place next week. 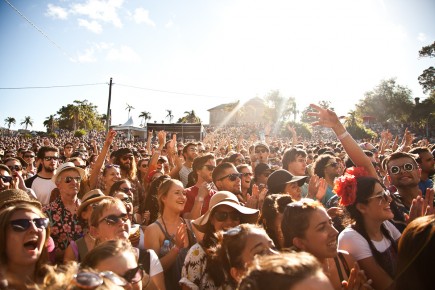 Check out our Laneway Gallery!