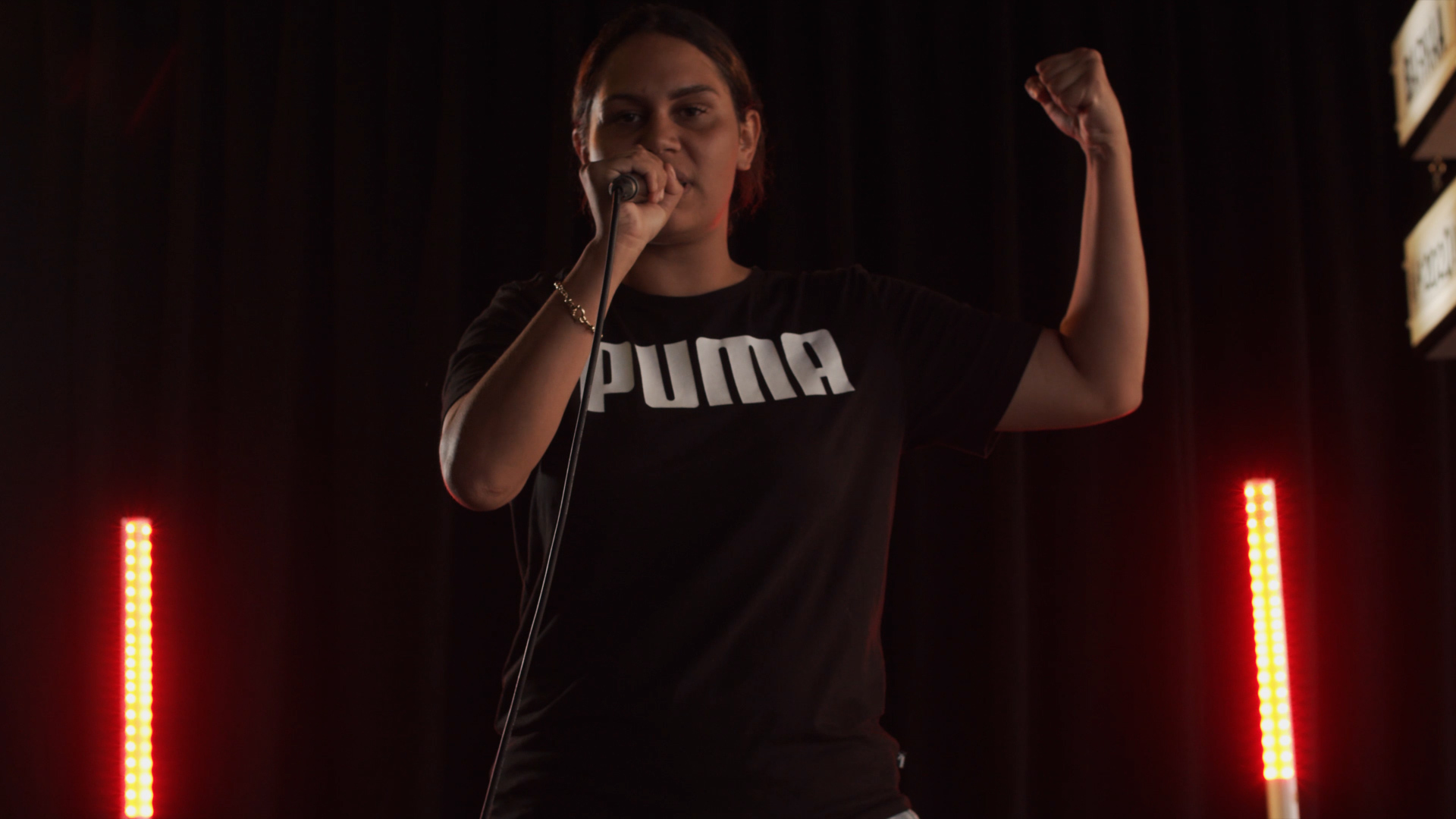 This year’s SMAC Awards were a special one, as we celebrated the mammoth efforts of local creative communities in responding to the BS of 2020.

The winners (below) were announced during a live broadcast on 94.5FM last night. Hosted by FBi Radio broadcasters Grace Farrell and Darren Lesaguis, the awards featured live performances from Barkaa and Ziggy Ramo. Rapper Ziggy Ramo took out the two big ones, winning Record of the Year for ‘Black Thoughts’, as well as Song of the Year for ‘April 25th’.

And we’re beyond thrilled to announce that the winner of the 2020 SMAC of the Year is Vanessa Turnbull-Roberts.A proud Bundjalung Widjabul woman, activist, writer, emerging leader and recipient of the Young People’s Human Rights Medal, she demonstrated fearless leadership as the systemic disadvantage faced by First Nations people was brought into sharp relief in 2020.

Moreblessing Maturure is a Zimbabwean/Australian inter-disciplinary artist, TEDx Speaker and the Creative Director of FOLK Magazine. Her work across form includes engagements with Playwriting Australia, ATYP and Sydney Theatre Company, as well as participating in Screen Australia’s Developing the Developer last year. In 2020 Moreblessing worked with Darlinghurst Theatre Company (DTC) in their ‘Next In Line’ program, was programmed to premiere ‘Milk & Honey & Lemons’ at Next Wave Festival and starred in the sell-out show ‘Leading Is Following Is Leading’ by Yana Taylor at Liveworks Festival.

The 22nd Biennale of Sydney (2020), titled NIRIN, was an artist and First Nations-led biennale, presenting an expansive exhibition of contemporary art that connects local communities and global networks. Meaning ‘edge’, NIRIN is a word from Artistic Director Brook Andrew’s mother’s Nation, the Wiradjuri people of western New South Wales. NIRIN demonstrated that artists and creatives have the power to resolve, heal, dismember and imagine futures of transformation for re-setting the world. Opening to the public 10 days before the Sydney lock-down, NIRIN persevered against the odds to re-open the Biennale and its vast array of exhibitions and programs to the public in late 2020.

Perhaps you first came across A Little Lagos when it was a pop-up, serving jollof rice at events such as Africultures Festival, or perhaps you enjoyed it with a beer during their residency at Earl’s Juke Joint in Newtown – where the golden glow of the hot bain-marie would spotlight Nigerian pies and well-spiced stews, and drew crowds from all over. In April, Adetokunboh Adeniyi finally found a permanent home for his West African eatery on Enmore Road. Despite opening during the lockdown, A Little Lagos has had a far-from-quiet impact. The wide-ranging menu reflects Ade’s upbringing in the Nigerian capital. A Little Lagos’ ultra-fun vibes means you might enjoy your asaro (yam porridge), Nigerian fried rice and ofada stew during an upbeat DJ set, while the Vegan’s Paradise are good reasons to check out the moin moin (bean puddings), fried plaintains and puff puffs.

Created in response to the COVID-19 lockdown, as well as a want to share their love of Blak literature with the world, Blackfulla Book Club was created by Wiradjuri and Wailwan woman Teela Reid, and Gumbaynggirr and Barkindji woman Merinda Dutton. The online book club found its home on Instagram sharing and celebrating First Nations literature, stories and voices. At its core, Blackfulla Bookclub is about the value in the way that First Nations people tell stories, and how stories connect people to Country and ancestors to enable a sense of healing.

As the unofficial anthem of Australia’s Bla(c)k Lives Matter protests, DOBBY backs up his song’s powerful message with an equally powerful and authentic music video. Presented by Vyva Entertainment and directed by Luke Currie-Richardson and Benjamin Ling, the video cuts between DOBBY and BARKAA’s performance with portraits of First Nations Australians. With the participants staring boldly down the barrel of the camera, often with fists raised, the video sends a crystal clear message of Bla(c)k solidarity and Bla(c)k pride in the face of eons of colonial violence.

A proud Malyangapa, Barkindji woman from Western Sydney, Barkaa is a force majeure on the Australian hip-hop scene. Living now on Gandangara land in Sydney’s South West, Barkaa raps with an unparalleled conviction. Her track ‘Our Lives Matter’ and her feature on Dobby’s ‘I Can’t Breathe’ became unofficial anthems of this year’s Bla(c)k Lives Matter protests around the country. With the power of her ancestors and her matriarchal upbringing driving her, Barkaa is a force to be reckoned with.

SONG OF THE YEAR – PRESENTED BY YOUNG HENRYS

Ziggy Ramo’s prolific record ‘Black Thoughts’ is eloquent and profound from start to finish, but ‘April 25th’ stands out as an instant anthem. Highlighting the societal double standard in celebrating White ANZACs while sidelining the plight of First Nations people, Ramo’s powerful and provocative lyricism about the ongoing erasure of First Nations history demands outrage, respect and ultimately, understanding.

Ziggy Ramo carves out his own space on his vital and eloquent debut album, ‘Black Thoughts’. Compelled by global Bla(c)k and Indigenous Lives Matter movements to make something uncomfortable, confronting, profound and intensely personal. ‘Black Thoughts’ details Ramo’s experience of growing up Aboriginal in Australia, through 16 tracks of lyrical storytelling and jazz-inflected, golden age hip hop. Ramo’s pain, anger, heartache, exasperation and exhaustion are all palpable throughout, but so too is his pride, resilience and optimism that First Nations people will continue to survive and thrive. Ambitious and multifaceted, ‘Black Thoughts’ is a lot of things: a testament to voice and presence, an exercise in healing and listening, a whole education and a necessary conversation starter.

“2020 was of course the year of the pandemic. But just as importantly, it was the year that a pandemic magnified the injustices and disparities that were already there, intensifying them and thrusting them to the front of the public consciousness. The systemic disadvantage faced by First Nations people in particular was brought into sharp relief, as the pandemic imposed its burdens disproportionately on communities of colour.

But with the country boarding itself up to beat back the coronavirus, and people moving even more of their real world activity online, it was going to take a feat of leadership to turn a spreading sense of outrage and indignation into concrete action.

The 2020 SMAC of the Year recipient has worked to pull the eyes of a nation down from high-profile overseas cases of systemic racism to those playing out within our own borders; to expose the hallmarks of a justice system weaponised against people of colour.

Having been forcibly removed from her own family just as the Rudd government was apologising to the Stolen Generation, this year’s recipient knows all too well that the actions of those in power don’t always match their rhetoric. She has called out this chronic failure of leadership, and helped focus the broader community’s attention on Indigenous deaths in custody and the continued forcible removal of children from their families. Through her fearless writing, organising and activism, she channels the emerging generation’s rejection of incremental change in the face of such clear systemic discrimination.

At the same time though, she rejects a narrative that centres on Indigenous disadvantage. She celebrates First Nations resistance rising out of community and kinship, and uses a message of strength to mobilise people – especially young people – to demand better. Through her study in law and social work at UNSW she has armed herself to lead, and that’s exactly what she’s doing.

The progress made by people like tonight’s SMAC of the Year recipient elevates our collective consciousness, fine tunes our powers of empathy and holds us to account for our stated positions. This can only result in art that is more honest, robust and inclusive, and in short: better.

This is on display in many of our winners tonight.

The 2020 SOTY goes to someone who, by her shining example, challenges us all to make our actions match our rhetoric. An activist, writer, emerging leader and recipient of the Young People’s Human Rights Medal.

I am honoured to announce that the 2020 SMAC Of The Year goes to proud Bundjalung Widjabul woman Vanessa Turnbull-Roberts.” 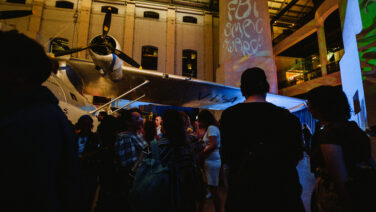 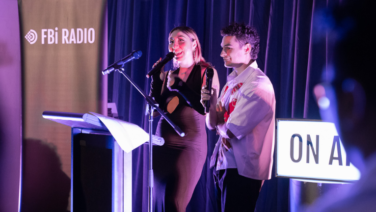 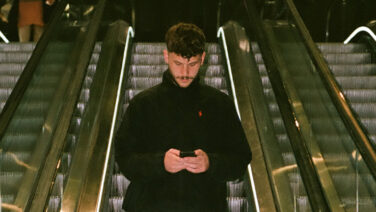