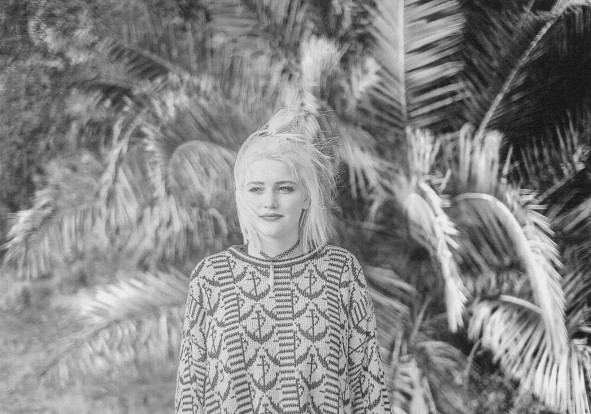 As western pop music shifts more and more into the electronic spectrum, and the technology to create that music becomes increasingly accessible, it makes sense that singer/songwriters have started to evolve beyond the traditional limitations of a voice and an acoustic guitar.

Brisbane artist Joy finds herself in the process of that evolution, producing surprisingly mature soundscapes to support her wistful seventeen-year-old voice.

Sandro Dallarmi :: When it comes to the task of making a track from scratch, you seem to have all bases covered from production to vocals. How long did it take you to get to this point as a musician?

JOY. :: Ah yikes. I guess I have been learning instruments and theory and all the musical knowledge goodness my whole life, and everything just developed from what I already knew. I think I am still growing as an artist, and there’s definitely things I can still improve. I haven’t really been ‘producing’ for very long at all, only a couple of months, but I have been composing pieces of music since I was little. So now I guess, I look at production more as composing, but through softwares like Ableton instead of transcribing onto manuscript.

The interweb informs me that you had a recent studio sesh with my favourite puppy, Basenji. What did you guys get up to between the ferns?

Ah yes the good old interwebs! Yeah when I was in Sydney a couple of weeks ago, Sebastian (Basenji) and I caught up for a little writing session. Essentially he just helped me with my production and gave me a few tips, tightened a few things up and just gave me heaps of samples. But to be honest, we spent most of the time there Instagramming his ferny studio and also softly sobbing over the wonderful tasteful creations that are cronuts.

Do you see yourself more as a songwriter or as a producer?

Hnng this is a hard one. I have been in like the acoustic-band scene for a long time before I had tapped more into the electronic scene, so I’ve always really been a song writer. I haven’t been producing for long though as I said before, and I think every producer has their own particular way of making a track. For me, I write the song first and then I like ‘produce’ or ‘electrify’ it. To be honest I’m not really sure what other producers do. However, I’ve really begun to get into remixing for fun and with that, it’s not really like writing a song and then plugging it into Ableton, it’s the opposite. So I guess I’m a bit of both!

Ryan Hemsworth :: ‘One for Me ‘feat. Tinashe’