Need something to read but short on cash? FBi’s Bargain Basement Book Club have waded through the dollar bins of Sydney’s secondhand book stores so you don’t have to. Whether they come up with pearls or discarded old boots, they’ll help you discover the treasures awaiting in the murky depths of the literary world…

She floated, unconscious, in a zero gravity field. A book cover her face, attached to her skull.

The cover of the book read: “‘Slaughterhouse 5’ by Kurt Vonnegut”.

“We’ve got to get that book off Nikki!” yelled Jessica.

“There’s no time, this bookstore is set to be sucked into a black hole at any moment!” said Andrew.

Suddenly, a space pirate ran down the stairs into the bargain basement. He stroked his long red beard and asked, “I’ll let you live if you give me the answer…”

There was a blast and the book flew off Nikki’s face, who shot up in an outrage and screamed, “FORTY-TWO?!” 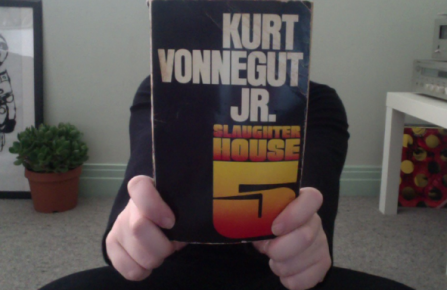 Kurt Vonnegut’s Slaughterhouse-Five has long lived on my ‘must read’ list. Infact, I once borrowed the novel from my high school library, then ran out of time to actually read it. Fitting for a novel about being unstuck in time? I think so.

This time round, I picked up a well-thumbed copy of the novel for keeps from Glebe Markets. For just four bucks, I’d purchased a ticket to time travel with Mr Kurt Vonnegut Jr and his pal, Billy Pilgrim.

Responsible for one of the most overly-tattooed lines in literary history, Slaughterhouse-Five constantly explores the theme of death without making you feel like a morbid weirdo obsessed with reading about death. The phrase “so it goes” surfaces after every loss of life, be it a revered army Colonel, a prisoner of war hobo or even a bubble-less bottle of champagne.

Billy Pilgrim, the novel’s protagonist, has come unstuck in time. He is constantly and without warning thrown between different moments of his life: he wakes up a New York based optometrist and goes to sleep serving during World War II. Billy even re-experiences parts of his life spent on the distant planet Tralfamadore, surrounded by small aliens who resemble upside down toilet plungers and communicate with one another telepathically.

“The most important thing I learned on Tralfamadore was that when a person dies he only appears to die. He is still very much alive in the past, so it is very silly for people to cry at his funeral. All moments, past, present and future, always have existed, always will exist.”

Oh Vonnegut. So it goes, indeed.

‘The Hitch-Hiker’s Guide to the Galaxy’ by Douglas Adams

Reviewed by Daniel Prior 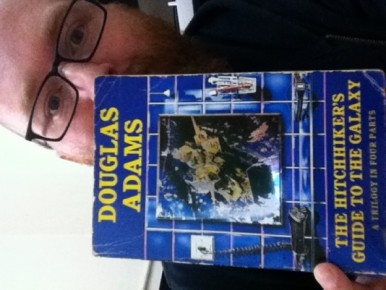 So, I’m cheating; I bought The Hitchhiker’s Guide to the Galaxy months ago, got caught up and was never able to finish it. Then when Sci-Fi came up as the genre for this month, I grabbed my book (costing a mere five earth dollars), packed the most useful tool in the universe: a towel; stuck out my thumb and launched on a journey around the universe and through time, all in the search for the Ultimate Answer to Life, The Universe, and Everything …

“You just come along with me and have a good time. The Galaxy is a fun place. You’ll need to put this fish in your ear.”

I have never read this book before. Somehow it escaped my formative years, which is a damn shame, as I’ve missed a multitude of opportunities to quote this brilliantly quotable book.

Douglas is as hilarious as he is creative. Jokes come thick on every page and rockets the story past the usual questions that arise in Sci-Fi novels, such as “How are they flying? How are they breathing? What happened to physics?” dismissing them with a line as simple as: “The ship hung in the sky much in the same way bricks don’t.”

You never question the ridiculous nature of of the story because, well, it make a ridiculous sort of sense that all of these ridiculous events could take place in our ridiculous Universe.

The Hitchhiker’s Guide to the Galaxy itself is a central object within it’s own pages. The book is constantly referred to in the story, like a galactic version of Wikipedia, always giving out interesting/useless information, like the very first thing you’ll read on the cover: “Don’t Panic”

Douglas touches on everything in his book. And when I say everything, I mean: “Life, The Universe, and Everything”, which is pretty much covered in the twenty-eighth chapter of this four part trilogy. Yeah, work that one out.

“ ‘…then we shall all be destroyed, we shall all die. Surely we care about that?’ ‘Not enough to want to get killed over it,’ said Ford.”

The comedic genius and the sheer chaos and creativity of the story, confirm claims that this is an absolute must read for anyone.

I could say more, or let the book sum up itself: 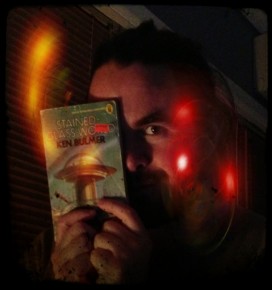 Science Fiction has always held the vague promise to ‘boldly go where no man has gone before’, and yet its real power is in holding a mirror to the paths we currently tread and illuminating often frightening futures. From this vantage point, sci-fi can whisper to us all our dirty little secrets without too deeply offending our sensibilities.

Stained Glass World falls squarely into this realm of post-apocalyptic, dystopian fiction. Set in the squalid cityscape of the world after the “Age of Material Plenty”, we find ourselves oscillating between the lives of the elite ‘uppers’ and the exploited ‘workers’.

The narrative explores issues of class & discrimination, drug use & dependency, consumerism and waste. Everyone in society is addicted to a fix; the uppers have their ‘juice’ and the workers their ‘trips’. One needle whisks you away to “a life more real than real”, another brings you back; known simply as “the Horrible Truth”.

Tensions emerge as trips begin to go awry, with disembodied heads and cat-people threatening our anti-heroes (just say no kids!) What lies at the heart of these aberrations will expose the dirty core of an entire world…

The weakness of Bulmer’s prose is that it tries too hard to be ‘sciency’ and futuristic. This is a modern criticism transposed on a book nearly fifty years old, and given that I wrote this review on a tiny, hand held computer I might have to give Ken Bulmer a break here.

I picked up Stained Glass World for a dollar at Elizabeth’s Bookstore on King St, Newtown. It was amidst a huge pile of pulp fiction, some with fantastically kitsch pop-art covers of phantasmagoric worlds. While none of these bargain basement books are likely masterpieces, they are well worth a look, offering a strange insight into the insecurities and fears of past generations writ-cosmological!

‘Secret of the Lost Race’ by Andre Norton 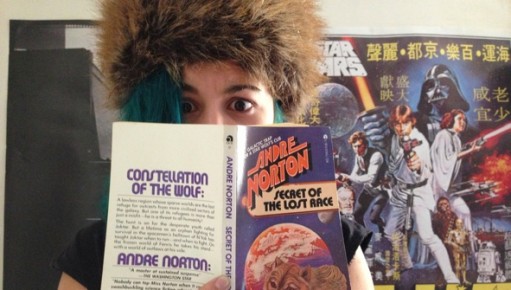 Picture yourself, an orphan living in the spaceport of N’Yok, with no memory of your past, no knowledge of your age, and a highly illegal “forceblade” on your belt. Oh, and the top rankers of the galactic service are hunting you down, headed by a curious maniacal xenophobe…

To make matters worse, you are buried in a box in Gould’s Book Store with other obscure titles from the ’50s, punctured by cheesy romance novels and scarred with the $3 label in toxic lead pencil.

Andre Norton’s Secret of the Lost Race follows young-looking Casino Dealer Joktar, who has dodged the law and outwitted criminals for as long as he can remember (not long), and must now flee a forced fate of celestial slave labour. After his supervisor is killed in an avalanche, he steals his coat in an unintended social commentary on capitalism, and subsequently must explain that he is not the evil authority that this piece of attire suggests. Devil Wears Prada style.

With Harry Potter being the closest thing to sci-fi I have ever encountered (no, I have never seen Star Wars, or Star Trek or ET; yes, I have been advised to join several support groups), lines like “Somehow the force of his authority sent them away and a door shimmered in its place” left me anxious and in need of another motivational block of chocolate.

Mr. Norton, I have a few issues with your book.

1. Did you really think placing “(Report from Hudd and Rusto, N’Yok to B. More, redirected to Kronfeld, Direction, Colonization Project 308)” at the end of a sentence halfway through the story would make me throw my head back and state in astonishment “OH THAT PROJECT, BY THOSE PEOPLE. HOW DID I NOT KNOW?”

2. I don’t understand why “the boss of the SunSpot… the only stable thing Joktar had known in this dangerous world” was killed off in the first chapter.

3. And then… “’Half-breed,’ Joktar said the ugly word”. Did you not pause to think that perhaps, 38 years later, Draco Malfoy would utter the same insult to Hermione Grainger in an attempt to protect the wizarding world from infiltration from the other race?!

4. “Instantly a vorp beam snapped in answer. The fact that his coat was too large saved him, as it was when he encountered the cat-bear.” Really? What on Mars is a cat-bear? REALLY?!

5. Why do the galactic space bigwigs call each other “gentlehomo”? I wikipedia’d it and everything. “Gentlehomo” isn’t a thing.

We’re leaving these books where we found them, with a little somethin’ somethin’ inside from FBi for those who seek them out. Got a suggestions for next month? Send it to flog@fbiradio.com