Need something to read but short on cash? FBi’s Bargain Basement Book Club have waded through the dollar bins of Sydney’s secondhand book stores so you don’t have to. Whether they come up with pearls or discarded old boots, they’ll help you discover the treasures awaiting in the murky depths of the literary world…

In the near distance, I spotted a motionless vehicular silhouette. A car, I had presumed. As I approached, it was just as I had suspected – a car, but with one door still open, as though to gesture to the garish mansion beside it and the unwelcome new guest which I could now picture inside.

“DANIEL!” I called, my voice ready to give way. My feet were already pummelling up the stairs to the moss-encrusted door, still slightly ajar.

“JESS? MINA?!” Queries now. Did I even expect an answer?

“… Andrew? Nikki? ” A whisper. And there they stood, huddled around the languid breathless object on the floor.

They had found the body of work.

‘The Big Sleep’ by Raymond Chandler

Reviewed by Daniel Prior 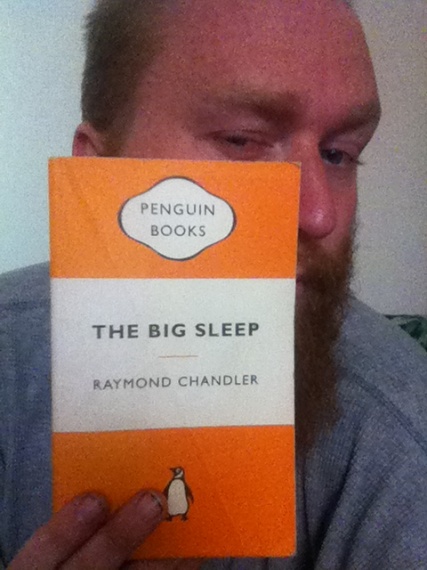 In Raymond Chandler’s The Big Sleep, Marlowe is the cynical detective hired by the aged General Sternwood to shake off a blackmailer. Marlowe is used to dealing with blackmailers, gamblers, pornographers, gangsters and every other seedy character LA’s underbelly churns up at him.

What complicates the task are the general’s two rebellious daughters, who go looking for fun in the very underbelly Marlowe is trying to wade through.

I pushed my lower jaw up off my chest and nodded at him. ‘Who was that?’

‘You ought to wean her. She looks old enough.’

The Big Sleep is full of great characters and witty one-liners, but it never really kept me on the edge of my seat; Marlowe always felt like the smartest guy in the room, always able to outsmart and out-play everyone to his advantage and was never surprised by any of the lewd going’s on in the story, no matter how many dead bodies or naked women he comes across.

The only real tension came out of a confrontation between Marlowe and a gangster triggerman towards the end of the book, however even that ended with a bit of a yawn from me.

‘I don’t see what there is to be cagey about,’ she snapped, ‘And I don’t like your manners.’

‘I’m not crazy about yours,’ I said. ‘I didn’t ask to see you. You sent for me. I don’t mind you ritzing me or drinking your lunch out of a Scotch bottle. I don’t mind you showing me your legs. They’re very swell legs and it’s a pleasure to make their acquaintance. I don’t mind if you don’t like my manners. They’re pretty bad. I grieve over them during the long winter evenings. But don’t waste your time trying to cross-examine me.’

Marlowe felt to me more like a character commenting on the novel taking place, able to predict the outcome and motives to everything, rather than someone swept up in the events.

That being said, it is still a worthwhile read, and for three dollars, you’d be crazy not to.

‘The Pale Horse’ by Agatha Christie 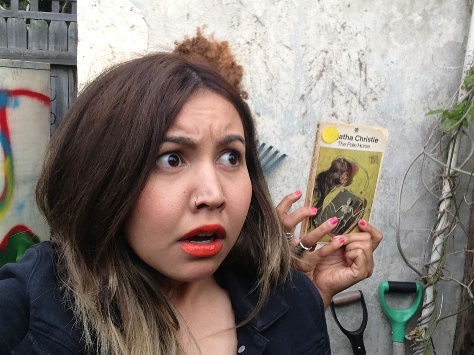 “The Espresso machine behind my shoulder hissed like an angry snake. The noise it made had a sinister, not to say, devilish, suggestion about it.”

I had to quickly flick back to the front cover to ensure that this was indeed Agatha Christie’s ‘The Pale Horse’ and not the transcript of a hipster voicing his anxiety about the trainee barista burning his half-strength soy mochachocachino at my local coffee joint.

As I feared, I had just begun wading into the cogitations of Mark Easterbrook, an historian specialising in ancient Indian Empires – a CV which had perfectly prepared him (in a totally unprepared way) for his impending role of (cue dramatic orchestral stabs) OUR AMATEUR DETECTIVE/ HERO/ GOOD GUY etc.

As I coughed my way through the dusty titles of detective fiction at Gould’s in Newtown, punctuated by the occassional, highly suspicious, misplaced children’s literature, my beady eyes were alerted to a ghastly green cover. On it, a skull with a Lady Gaga-esque wig and a pterodactyl-esque  skeleton, neither of which, might I add, were to scale (for evidence, see episode #43 of The Magic School Bus). I placed it in a seal-lock bag beside my sandwich and slipped the shady looking lady at the counter five dimes with my gloved hand.

Meanwhile … Mark is going about his day-to-day business and perchance witnesses two chicks having a hussy fight, during which girl number 1 one rips out a ginormous chunk of girl number 2’s hair and/or weave with unnerving ease.

A couple days later, girl number 2, Thomasina Tuckington, dies. Mark reports the incident to the po-po, and is told Thomasina’s name was on a list found in a (now dead) Catholic priest’s shoe; a list which had been given to him during a dying woman’s last confessional. Not coincidentally, Mark’s godmother’s name is also on the list; a godmother who had died of apparent natural causes weeks earlier.

Mark then hears of ‘The Pale Horse’, not a pale horse, but rather a “half-timbered building (genuine timbering not faked)” in a nearby village. He sets out to meet the three modern “witches” living there, rumoured to be modern day black magic hitmen.

Mark’s friend Ginger assists him by pretending to be the ex-wife he asks the witches to seek revenge on. But then Ginger falls drastically ill. A witnesss comes forward – Zachariah Osbourne says he saw mysteriously rich wheelchair-bound figure Mr. Venables near the scene of the crime the night the priest was murdered. But then GINGER’S HAIR FALLS OUT. LIKE HIS GODMOTHER’S HAD. AND THE GIRL IN THE BAR. Thallium poisoning, not magic, concludes Mark.

Osbourne heads a cosmetics survey company linked to The Pale Horse. He knew what products the victims used. His former business partner had tried to tell the Priest.

AND MR. VENABLES WAS ACTUALLY JUST A RANDOM RICH GUY IN A WHEELCHAIR.

I sighed and took the final sip of my half-strength soy mochachocachino. 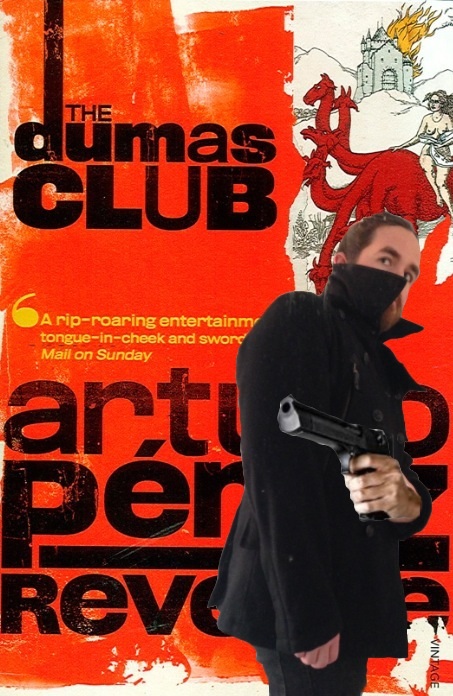 “He was about to add, “This is real life, not a crime novel,” but didn’t. At this stage in the story, the line between fantasy and reality appeared rather blurred.”

Bookstores these days are full of ‘Crime’ or ‘Thriller’ shelves and that’s really not quite right is it? We can get crime stories in the newspaper. What we read are ‘Detective’ novels and we read them for the detective.

Corso is the book nerd we all want to be; fluent in Latin and Greek and handy in a fight. He packs a pistol, a 17th century manuscript and he knows how to use them! Corso hunts down ancient manuscripts for furtive buyers who know what they want and are willing to pay for it.

Book hunting is a lucrative business, that is until a prominent bibliophile is found dead, hanging in his own study. Corso is called in to authenticate the provenance of a handwritten chapter of Alexandre Dumas ‘The Three Musketeers’ recently sold by the dead man. But who are milady and the mysterious Rochefort, seemingly emerged from the pages of the story to dog Corso’s trail?

“To understand it all he first needed to find out the other stories, all knotted together like the cord Enrique Taillefer used to hang himself.”

Pretty soon a satanic tome, believed written by the devil himself enters the picture, followed by Corso’s obligatory love interest. Is Irene Adler, pulled straight from the pages of Sherlock Holmes, the devil or just a very naughty girl? You just know that some postmodernly wonderful is about to happen.

As Corso flies about Europe seeking answers in the annals of literary history he learns that books are more than just stories or objets d’art, but living worlds.

“This was our true common heritage: stories faithful not to what people see, but to what they dream.”  …

“Now, neither children nor young people nor anyone else has a spiritual home. They just watch bloody TV.”

The Dumas Club is the sort of book you dread ending, because then it is over. The sort you would love to read again but know you cannot, because it’s secret has been revealed, the curtain pulled back, and you can never go back to not knowing… 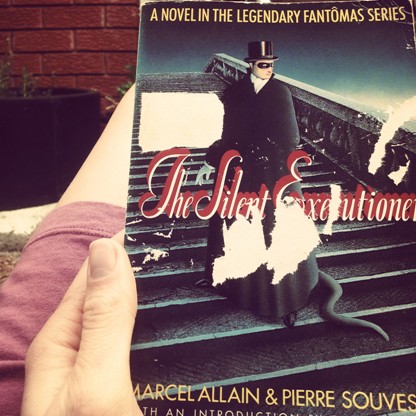 “Like the gaslit mists of the Paris netherworld in the wicked 1890s, like the presence of evil itself, Fantômas will not go away.”

I judged a book by it’s cover and stumbled upon the most notorious and re-written French serial killer in history.

‘The Silent Executioner’ was tucked away in the library of second-hand books upstairs at Berkelouw, Newtown. I chose it first for its title, and then for it’s battered and torn cover, that bore a picture of a masked, caped and top-hatted Frenchman, who stylishly resembles the lovechild of Dr. Watson and Zorro. (I just noticed that he also has a giant rat’s tail, but I’m choosing to ignore that detail.)

Fantasising about Jude Law and Antonio Banderas, I launched myself into the second of a series of 32 novels, co-written by two French writers in 1911. Marcel and Pierre set themselves a plot, then went their separate ways to write alternate chapters, meeting only at the end to tie the two halves of the story together in the final chapter. They pumped out a novel a month and, in the process, created one of history’s most malevolent murderers, the legendary Fantômas.

“It’s astounding! This murder presents mysteries worthy of Fantômas himself!”

Fantômas is the ultimate villain: a master of disguise who leaves female corpses with every blood vessel burst and every bone broken, who kills with boa constrictors and plague-infested rats and who traps our heroes, Juve and Fandor (think Sherlock and Watson in berets), in sinking rooms full of sand.

The character of Fantômas represents the transition between the gothic and modern day serial killer and quickly inspired one of the most circulated comics in Latin America, the poems of French surrealists, American novels, Italian super-villains, a character in Doctor Who, a band and a series of old movies.

The book was every bit as melodramatic and cliched as I’d hoped, but I read the whole thing, addictively, in one sitting and then spent the night Googling. That’s the great thing about this book club. You read some crap, and then you read something you expect to be crap and it sets you on an all-nighter rampage where you end up watching hours of old black and white French silent films.

This one gets plenty of stars from me, even if just for the power of its cover.

We’re leaving these books where we found them, with a little somethin’ somethin’ inside from FBi for those who seek them out. Got a suggestions for next month? Send it to flog@fbiradio.com