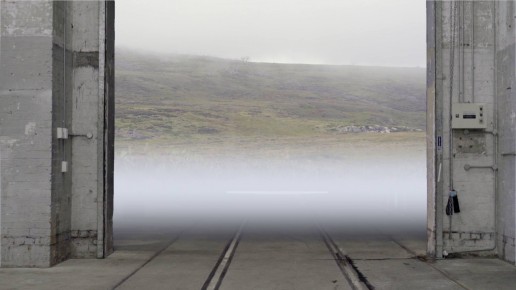 In his solo show, Site Specifics, Bryden Williams reimagines the functions of industrial infrastructure to create landscapes where urban and rural wilderness blur.

A streetlamp extends from the trunk of a She-Oak. It arches over a still river, late at night, colouring the photograph in sepia tones. While such an image is not so out of place in an age of photoshop, Williams’ work differs, as the image acts as a document of a built scene; a disused high-pressure sodium streetlight is rigged to a tree on the banks of the Coxs river, not far from where he grew up in the Blue Mountains. Each work in Site Specifics extends past the gallery space, gesturing towards a process of finding, constructing and reworking.

Humans are absent from the work in Site Specifics, leaving room to record subtle moments of action and reaction between different systems. The 3.5 metre streetlamp in the photograph is installed in the gallery, shining into the corner with a brightness that fades and increases depending on the surrounding light. A fire-sprinkler unit is bolted into the walls, supporting a video screen displaying the same sprinkler assembled above an open fire in deep bush. At the moment of activation, water is pumped through the pipes from a river offscreen. Williams work presents an ecology of hijacked structures, bringing into question the way we occupy and manipulate space.

Site Specifics pin-points moments of control over our environment, claiming and rearranging them, to problematise the basis on which we deem spaces exterior and interior, natural and unnatural.

WHAT: Site Specifics
WHERE: Interlude Gallery, Glebe
WHEN: 4 – 13 Feb
HOW MUCH: Free – more info here