The Early Days: A Brief History of FBi Radio 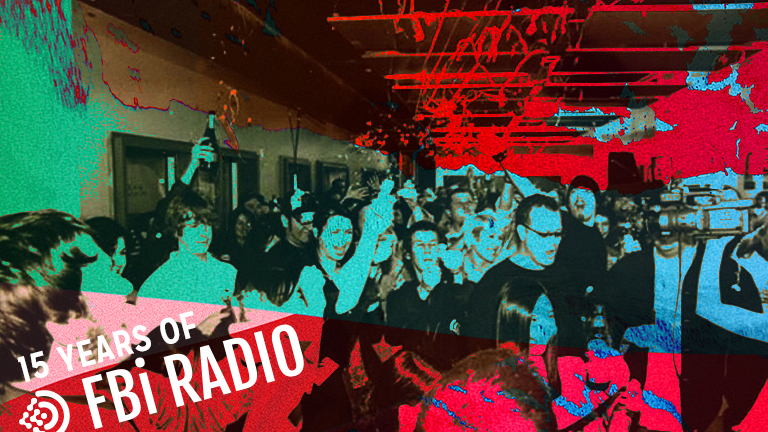 On August 29, 2003, FBi started broadcasting full-time. Here’s a look at the lead-up to this event, and some of the great moments that followed.

These were the days when FBi Radio ran out of a shopfront off Pitt St Mall, its frequency was 96.9FM, and there was a benefit gig with Silverchair, Ben Lee and more.

“SILVERCHAIR join the stellar line-up of bands supporting the extremely worthwhile FBi radio benefit on Saturday at the Hordern Pavilion. Also new to the bill is an acoustic Ben Lee, S & M (alias Ratcat’s Simon Day and Marc Scully), Couch (Allanah ex Hummingbirds and Tim Northam), string quartet Coda and comedy group the Dolce Twins. Tickets are an incredibly el cheapo $18 plus booking fee from the usual places, and the drama unfolds from 5pm.If you can’t make it to the benefit, check out FBi’s first major broadcast this weekend from noon tomorrow through until Sunday midnight on 96.9FM.”

The days when FBi was test broadcasting and a whole bunch of other stations were also vying for an FM license.

“…When will the Federal Government and the Australian Broadcasting Authority finally agree on how many new radio stations Sydney will be granted and what shape they will take? Well, no one knows for sure.

Regardless of the politics, FBi Radio is forging ahead with another test broadcast, transmitting out of a bunker below Sydney University’s Footbridge Theatre.

Few of the original members of the collective which launched FBi in 1995 remain. The core crew is now much younger, enthusiastic, perhaps a little inexperienced but learning quickly.

Not that you’d notice any nerves from tuning into 96.9FM over the past few weeks. Ten test broadcasts in and the FBi announcers sound fine and the station itself has broadened and refined its playlist, still maintaining its emphasis on locally produced music.

With the eight-week transmission going well and subscriptions up to 2000, FBi board members admit the race for a full-time licence has been gruelling and frustrating, but also fun along the way…

The set-up under the Footbridge Theatre, space lent to FBi by the university’s student union, isn’t glamorous but it’s certainly an improvement on the shop-front window of the first broadcast in 1995.

The editing suite is the drama society’s storage room, the former residents’ props stacked to one side for the duration of FBi’s six-month lease. The porthole into the studio — a virtual cupboard — doesn’t have any window but no one seems to care.

There are more than 70 shows a week on FBi, put to air by over 100 volunteers. There are production workshops for university students. “The response this time in terms of phone-ins and people coming into the station to pay their membership is fantastic,” says broadcast co-ordinator Daniele Buhagiar.

Some 14 other parties are vying for the same licence as FBi. Regardless of whoever wins in the end, everyone agrees, Sydney radio has never sounded better or fresher.” 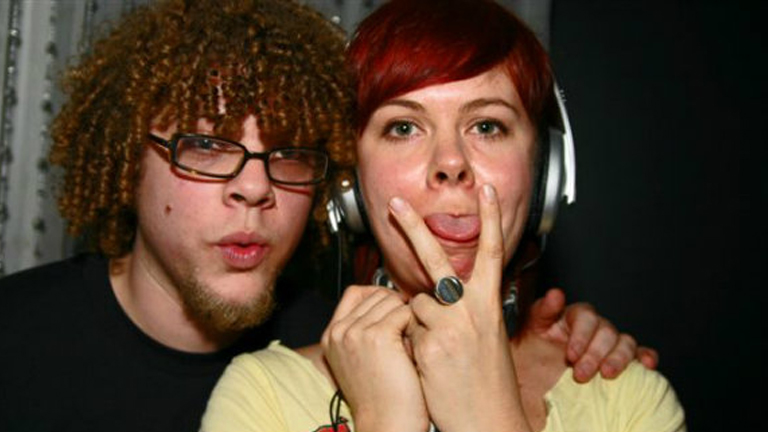 “Can you believe Sydney has the Olympics (yawn) but is the only state capital without a permanent music and arts-dedicated radio service?

Unless my favourite frontrunner for a licence, FBi Radio, is doing a test broadcast, car trips are spent twiddling the dial in vain or rummaging through the glove box for tapes — both guaranteed to cause an accident sooner or later.

But awarding FBi and two other radio stations permanent licences is about something more important than averting road rage.

It would be a huge boost for the local music industry, which has languished without an outlet on the airwaves since TripleJ moved on from being a local to a national broadcaster. While the spread of TripleJ was a godsend for regional youth and bands (silverchair spring to mind as one band discovered by the station), the move left a profound gap — some would say a black hole — in the Sydney music scene.

The lack of an outlet for original new music has led to a slump affecting venues, promoters, managers, distributors, musicians and probably roadies across my city. Without local radio support, it’s difficult for artists to promote their music in Sydney or to tour to other capitals. Bob Carr et al love telling us that Sydney is the cultural and economic capital of the nation but without an independent outlet for young creative types the claims have little weight.

FBi, which has done 10 test broadcasts since its 1995 inception, has a policy of playing 50 per cent Australian music, of which at least 25 per cent is Sydney-based.

A decision by the Australian Broadcasting Authority on which of the 17 community aspirants snare the radio licences is expected before the end of the year.

FBi’s final test broadcast runs throughout May on 96.9FM.”

I Spy For The FBi compilation album is released – a collection of 18 tracks by bands featured on the station, including You Am I, The Whitlams, Frenzal Rhomb and 78 Saab.

IT WON’T BE BLOKEY

“Something odd is happening at Sydney’s new radio station, FBi. It is not its promise to play at least 50 per cent Australian music, half of that from Sydney. It’s not the roster of more than 100 broadcasters (announcers, producers, reporters, contributors – almost all of them volunteers and most of them under 25) in a market where everyone else is operating on bare bones, staff-wise. Nor even the eight-year process that began with trial broadcasts in 1995, has endured money crises and has yet to completely see off a court challenge from a rival bidder for the permanent licence. No, the oddest thing about FBi is that it is not being run by blokes…”

“They say Sydney’s music scene needed a local radio station. It’s got one now. FBi starts broadcasting today.
If the local live scene has been languishing, one reason is that Sydney doesn’t have a community station for youth-based music, arts and culture. 2SER does a great job, but there is no equivalent to 3RRR in Melbourne or 4ZZZ in Brisbane.

Fortunately, new Sydney radio station FBi aims to fill the void. The station, which goes to air today, hopes to deliver a blend of music, arts and culture to younger listeners. Half of the music will be Australian; half of that will be from Sydney…”

“After almost 10 years of lobbying, court battles and financial crisis, Sydney’s very own alternative music station is finally up and running.

Think of the defining moments in Sydney’s history since 1770. There was the day James Cook drifted into Botany Bay and thought it looked like a good place for a beer and a barbie… And then there was August 29, 2003 – the day radio station FBi launched, after several false starts, in Sydney.

So it’s big news and it’s good news, but what really makes the launch so sweet is that it looked as though that day would never come. Since the idea of FBi first came up about a decade ago, there have been scandals and Supreme Court cases, back-stabbing and funding crises. Indeed, the history of FBi reads like the script of a soap opera…”

Check out this ABC video profile from 2004 on our then Radio Development Manager Tiani Chillemi. The vid features Wolfmother, Architecture in Helsinki and a lot of FBi’ers looking very young!

You know you have been listening to commercial FM radio for too long when you can sing the “Go Harvey, Go Harvey, Go Harvey Norman” jingle by heart… When I write “you know” I really mean “I know”. As usual, this column is all projection.

I have known the pain of commercial radio addiction… I was burdened with excessive knowledge of the traffic conditions at the Falcon Street exit and the secret sound a car boot makes when it is unlocked. Then something happened. I discovered FBi Radio 94.5FM, which I will now proceed to plug shamelessly.

I’m no music expert. I don’t know my noise pop from my breakcore but I do know that the music this independent station plays is seriously good. So superior is the music that I feel compelled to describe it with adjectives I despise: vibrant, creative, cutting edge.

FBi, which gets only about 6 per cent of its funding from government, has been credited with reviving the live music scene in our city after its pokie-driven decline. Archaic as it may seem, radio is still an effective way of mobilising people and bringing them together to fight a common cause.

FBi has embraced Sydney music since it began broadcasting full time in August 2003. A quarter of the music played on the not-for-profit station comes from Sydney bands and another quarter comes from bands elsewhere in Australia. Unlike the safe music played by commercial radio, FBi takes chances on local talent. Once a month they hold open days where bands can come into the station and share their wares in the hope of being broadcast.

Taking chances has paid off. FBi gave a break to Wolfmother, who this won a Grammy for best hard rock performance.

FBi does not suffer from the tragic officialness of many Government youth projects and yet many of the announcers and musicians at FBi are young. They show what people who were born in the 1980s are capable of when given a chance. They will be slightly shambolic, they will bollocks things up every now and then but ultimately it will all be worth it for the glimmers of brilliance and newness you would never get from the formulaic safety of commercial pop radio… 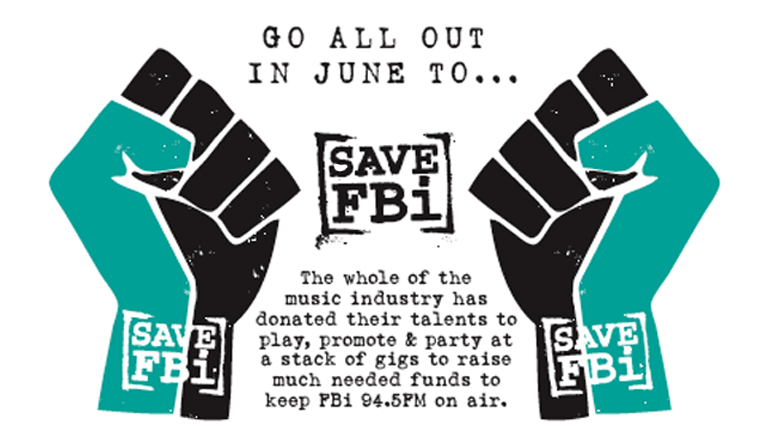 “MOST people who care about local music will know about the financial woes of community station FBi Radio 94.5FM. You may even have been to some of the fantastic recent gigs to raise money for the station. But we have good news and bad news.

The bad news is your work as a fan isn’t yet done. The good news is you can have a lot more fun continuing to raise funds: more than a dozen gigs are yet to come, starting at the Metro Theatre tonight with Katy Steele from Little Birdy headlining.

“They’re actually really important to get people to because they are pretty much the make-or-break of the station at the moment. Absolutely every cent of every ticket goes back to FBi.”

…The station has been doing everything it can to raise awareness of its plight and garner much-needed funds, including an ambitious request for cash to billionaire entrepreneur Richard Branson who didn’t give the $1 million the station needs for long-term sustenance but did donate flights to London, an autographed copy of his latest book (of course) and a lot of sage advice. “His way is to help businesses help themselves,” a still-grateful Loader says. “He’s been amazing.”

Saving the station, then, comes back to you, the public. Even if you can’t make it to any of the gigs, you can still help…”

A MYSTERY woman who swam to Sir Richard Branson’s private island convinced him to call a Sydney community radio station pleading for his help.

FBi Radio, the largest community radio broadcaster in Australia, has been running an “Ask Richard” campaign to hit up the jet-setting entrepreneur for $1 million in emergency funding.

Listeners have thrown themselves out of planes, held busking marathons and made video games to get the music-loving businessman to notice. But it was a “soaking wet” young woman on his Caribbean island who grabbed Sir Richard’s attention.

“It runs on the smell of an oily rag, has helped many unknown acts become stars and is capturing a surprising audience. Barry Divola charts the rise and rise of Sydney radio station FBi…”

Ten years of FBi: shoot-from-the-hip radio that stays true to its roots

All our thanks and love to everyone who has been a part of FBi Radio’s history.