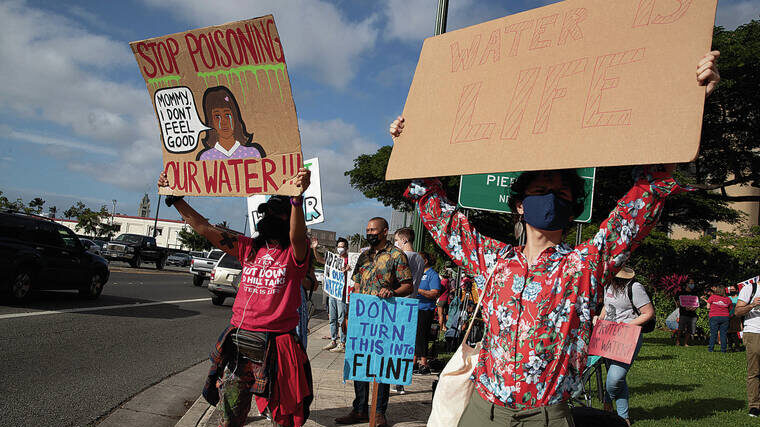 Each week on the Sunday Dispatch, Lindsay Riley talks with writers, activists and experts to better understand issues from all around the world. This week, he sat down with Hawaiian activist Kawenaʻulaokalā Kapahua to talk about the poisoning of Hawaii’s water supply by the United States Military.

The people of Hawaii recently won a key victory over the United States military after months of protest and resistance. The victory came in the form of a commitment to closing Red Hill: a military station that is leaking fuel into the island’s water supply. More than 100,000 Hawaiians have been displaced from areas close to the station, with thousands more admitted to hospital with serious health complications from the poisoned water. Around 20 per cent of the island’s water has been turned off to protect against contamination, and Kawena fears that without swift action, Hawaii’s entire water supply could become undrinkable.

“Hawaii is one of the wettest places on earth. We see some of the highest levels of rainfall anywhere on earth. And this summer, when people turn on the tap, there will be nothing coming out of the tap. That’s how extreme this is.”

Kawena places this struggle by the Hawaiian people alongside a long history of resistance against the United States, since its military overthrew the Hawaiian government in 1893. He says the occupation and integration of the islands under the economic interests of the U.S. has brought untold environmental destruction to the water and lands of the country, and restricted the self-sufficiency of its people.

“When the U.S. military came in and pivoted our economy to tourism, we saw the destruction of massive areas of sustainable farming grounds… And stripped our ability to farm and feed ourselves. We now import over 9 per cent of our food, and obviously that means the cost of living has gone up significantly.”

The U.S. military is Hawaii’s biggest landowner; using much of this land for military bases. Kawena explains how the long history of environmental disasters and degradation in Hawaii and the greater Pacific goes hand in hand with the U.S.’ desire to project power and control the Pacific seas.

“The Pacific islands have always been America’s idea of their possessions, and an expansion of their ideas of Manifest Destiny and white supremacy and imperialism, to get their piece of exploiting the people of Asia….they used Hawaii as a staging point for their incursions into Vietnam back in the 1970s, also the Korean War. None of those imperialist wads would have been possible without Hawaii as a base.”

The U.S. military has covered up and evaded responsibility for the poisonous leak since it was first revealed in 2014, and is still giving itself fourteen months to close down the facility: a dangerous time frame which could see the level of contamination rapidly escalate. But the unprecedented scale of resistance and fight shown by the Hawaiian people has Kawena confident that they will win their fight for clean water and self-determination.

“This was not just the U.S. military coming to its senses and deciding “Oh, we’re poisoning our own people, we need to stop this. They fought and lied for months and months… What really took place here was a unification that we have possibly never seen since in the history of Hawaii since the occupation began. Because the Hawaiians, we’ve been fighting since the days the Americans landed on our shores, but this wasn’t just the work of some fringe group radicals, this was every single person, in multiple communities, standing together.”

For more interviews like this, tune in to the Sunday Dispatch from 8:15am each week on the Sunday Overhang with Lindsay Riley. In the meantime, you can listen back to Lindsay’s full interview with Kawenaʻulaokalā Kapahua up top.