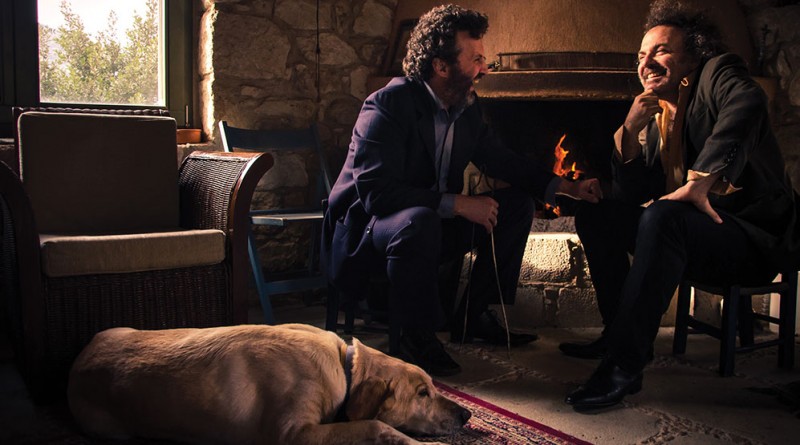 Following the release of their fantastic album Goats in late 2014, Xylouris White, the virtuosic combination of George Xylouris and Jim White, made their one and only Sydney Festival appearance on Thursday.

The pair came together nearly two years ago after collaborating on several projects and seeing one another perform in Melbourne. A mutual admiration led to a long-distance friendship between Xylouris’ home in Crete and White’s in Brooklyn, New York. After White was finally able to travel to Crete, they formed their inimitable band.

Their music is at a cultural crossroads: on drum kit, Jim White is one third of legendary Melbourne band the Dirty Three, easily one of the world’s greatest drummers; and on the Greek loutos, George Xylouris embodies a lineage of Crete’s greatest musicians, including his father, lyra player and singer Psarandonis. Both Xylouris and White are musicians at the height of their abilities.

On a balmy summer evening, Xylouris welcomed his audience in his native language and after a cheery reply from some of the audience (‘Geia So!’) I had a feeling this would be a special concert.

The Greek word Pyrrhichios, literally ‘firesound’, is a style of rhythm heard around Greece and its bordering countries.

It is also a word Xylouris himself uses to describe their music, and when taken literally, it is perfect.

It was a swirling mix of traditional songs filtered through a post-rock lense, doing its best to defy categorisation with hints of drone, blues, minimalism and hard rock. They created a full spectrum of colour from two instruments and occasional vocals: bellowing tom toms with vigorous strumming would quickly flow into light cymbals and harmonics.

Much of the energy of this music came from its free flowing structure, each song would begin with a distinct theme, usually with a Byzantine guitar riff at its core, and gradually unwind into improvisation, shifting the pulse and rhythm with ease, both players always anticipating the other’s next move.

With equally curly mops of grey, they were an unassuming and intriguing pair to watch onstage.

White, like his bandmates in the Dirty Three, is particularly enthralling to watch.

He winks at his Xylouris, gazes deadpan into the audience and writhes as if trying to shake something invisible off his back occasionally looking up at his outstretched mallet as it comes back down onto the snare.

Xylouris too was impassioned and humble, singing with closed eyes as if communicating with someone who wasn’t in the room. He didn’t speak much, but when he did he would give a brief description of what they were about to play, including the expressive Rizitika, a slow ballad that transported us from a humid tent in Hyde Park to chilly winter evening in Crete with the snow coming down ‘slowly and beautifully’.

They concluded their set abruptly with a smile and a shrug, and after hopes of an encore faded, the gig was done. This music could have flowed on for ever, swirling, ever varied, sometimes dark and tempesteous, and sometimes glistening, but always beautiful. The show’s 75 minutes felt too short, but we were privileged to catch a brief glimpse into an ongoing musical journey.