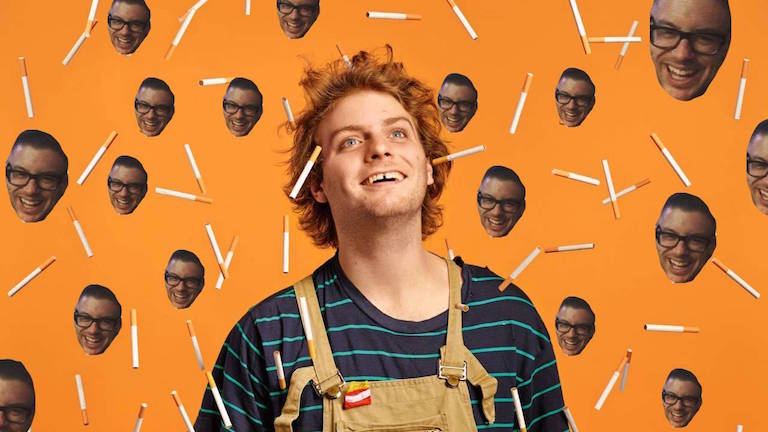 Canadian singer-songwriter Mac DeMarco released his third full-length album, This Old Dog, only a few days ago. Chris Twite spoke to the man behind indie rock’s favourite gap-toothed grin about moving to LA, writing the new record and why he’s never owned a dog.

Chris Twite: From album of the week for Salad Days in 2014 to an interview alongside his mum for Laneway Festival in 2015, Mac DeMarco is no stranger here at FBi. We’re currently joined by the man himself to chat about his upcoming third album, This Old Dog, due for release this May. Mac, thank you so much for having a chat.

You were on tour last time with your mum.  You managed to come out on Laneway Festival, that was a big moment for Australian audiences. What was it like going on tour with your mum?

It was cool, I think she had a blast. She’d never been down there before, it wasn’t even my idea it was the guys from Laneway. She was quite happy I think.

We thought ahead of chatting to you that we would reach out to your mum and ask if there were any messages that she wanted to pass on to you, and she very willingly sent through some stuff. So this is what she had to say: “Ask him to send me the link for the album, he said that it had already leaked but it’s been taken down, I want to hear ‘Sister’. Oh and also tell him that I love him”. Does your mum regularly pirate your music?

I think I told her to because I don’t have a link for it, like I didn’t even have it for a while so I figured there it is, and she’s been asking me for it. But I’ve got a lot of stuff going on in the next couple weeks so figured it’d just be the quickest way, you know.

Tell us about that track ‘Sister’. What can you tell us about the record, are there tracks like that one that we should be listening out for?

I mean it’s a record, I don’t remember how many songs are on there, twelve or something, thirteen or something like that.

Yeah, songs about my life, my friends, my family, being alive. Some synthesizers, some drum machines, some acoustic guitar, a little bit of electric guitar. There’s some singing, some drumming, there’s some bass playing and…take it or leave it I don’t know, check it out if you like it [laughs].

And you played all the instruments on the record, is that right?

Because you normally tour with a band , tell me about the process of just putting it all together yourself and not bringing extra people in.

I think what I do, I kinda just lock myself in my bedroom or wherever for a couple of months and start hammering away and get it to a place I’m comfortable with. And then send it to mastering and then the record label gets it and then I’ll send it to the guys that I play with and then we learn it! And then we go on tour, and that’s kinda the timeline I suppose.

Talk to me about that process of handing it off to the label, like particularly when you’re locking yourself in your room for so long and you live with this record. What’s it like to hand over, what’s that process like?

It’s cool, I think I’m in a position with them now where we’ve worked together for a long time, they’ll know when I’m working on it and then I’ll send it to them eventually. But yeah it’s cool, I guess it’s a little weird because nobody’s around when I’m writing it or recording it, nobody really hears it except for my girlfriend maybe. It’s exciting in a way. With this one, we had to get it mastered a couple times, like I had to fix a couple things, so I was a little bit tired… Writing the songs and recording them is fun, but the technical side of it got a little bit annoying at the end, so I was like “take it, take it away”. But now it’s been a few months, so I’m happy to immerse myself back into whatever it is that I’ve made, and then go play it for people.

I’m sure people are excited to hear it live. When you started this record you were living in New York and you moved to LA once you were finishing it. Did changing cities change the record?

I don’t think so, I had most of the same stuff that I had in New York here. I bought a couple more toys, but I think it was just one bedroom to another. I could make a record in Antarctica if I had the right gear and maybe it would sound the same. It’s hard for me to say because I’m too knee deep in it.

I really think you should pursue this idea of an Antarctic record Mac, I think that could be your opus.

It’d be cool to see Antarctica, I’ve got a couple of friends who’ve been down there before, it’ll be a little chilly though, but hey I’m from Canada after all.

It’s not been so long since you’ve moved from Montreal to New York, and now LA. Do you think you’ve found your spiritual home in the city of Los Angeles, are you now a SoCal dude?

No [laughs] no I’m afraid not. I’m still learning about this place and the vibe that this place gives off. It’s a weird place because there’s a lot of different layers to it, there’s definitely an evil to Los Angeles but it’s covered in all this gloss and ease of living. But I enjoy it, it’s a famous city and it’s nice to live in a place that has a reputation and has industry. I love New York for a lot of those same reasons, it’s interesting to be around that kind of thing. Maybe I’ll end up here for a long time, maybe not, but I never seem to be able to stick in a place for more than three years, so we’ll see. I’m liking it so far, we just got here, so I’ll give it a good college try.

Let’s talk a bit more about the record, one of the first tastes we’ve heard is ‘This Old Dog’. Can you talk to us about that video? It’s a bunch of people running around with dog masks, are you one of the masked dogs? Is that you, or just your mates?

Wow, the secret’s out now Mac. You’re not really a dog person?

Maybe LA’s the space, you’ve got plenty of land to get one. I don’t know how touring works with them though.

It’d be cool but the problem is my girlfriend knows if I get a dog then it’s just her dog, because I’ll be on tour, so she’s kinda like “you’re gonna leave me here with an animal”. So maybe! Or maybe not.

Is there anything else we should be looking out for on the record? Any surprises , anything that’s different from a previous Mac DeMarco record that we’re going to be like “Wow, this is a change from the Mac DeMarco we’ve known and loved”?

I mean it sounds different I guess, and the songs are a little different. Not a lot of necessarily fast songs anywhere on the record, a different palate of sounds and tones and crap like that.

No, no I’m afraid not. This is my, I don’t know what this is, this is my Italian rock record, yeah. There you go.

Italian. This is my Italian record.

Your Italian record! I mean you touched on some of those Italian sounds in your really early work, is that what you were harking back to?

I don’t know, I don’t even know what Italian sounds would be…opera…

I was thinking back more to your mixtape days.

Ah! I don’t know, did that sound Italian?

Maybe, sounds American [laughs]. Some of this stuff reminds me of what I used to do actually, on this record in some ways. Now I’ve kinda reached a point where I am able to do some things that I wish I could have done back in the day. It’s just some songs, take ‘em or leave ‘em, if you like them that’s great, if not that’s ok too!

On that point, what do you think has changed that allows you to do things you couldn’t do before?

I mean, it’s not like I had a barrier or something like “No I can’t…”. I think I’ve gotten better at music, I’ve gotten better at recording, just things like that. Maybe I’d have a concept or an idea, and I’d try to attempt something and it would end up coming out sounding so crazy. But now if I have an image I can get a little closer to it. But at the same time I still really don’t have any idea what I’m doing [laughs]. I just, I’m enjoying it, baby steps, learning a little bit more every time.

Well it seems to be working for you Mac, any chance we’ll see you out here soon?

You will, I think next summer for you guys, so around the end of the year or maybe the beginning of the new year. I’m not sure if I can say for what yet, but something familiar to us… and it should be a ball.

Listen to the full interview above. ‘This Old Dog’ is out now.