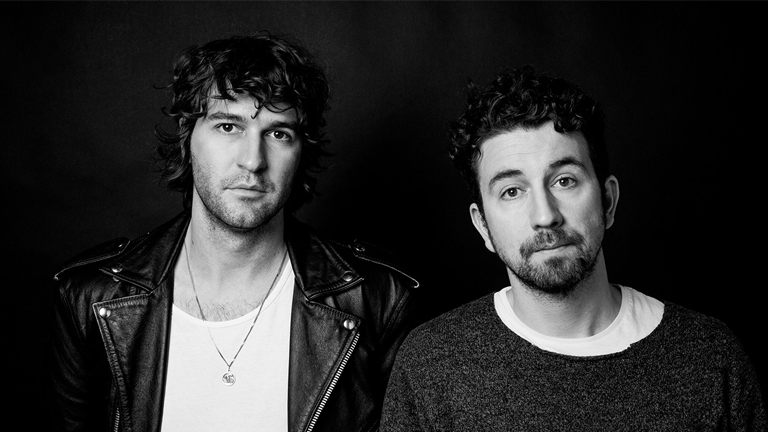 Three years since their last record, Japandroids returned in 2016 with new music, the promise of a new album and a string of Australian shows. The punk rock duo, Dave Prowse and Brian King, had a chat with Darren Lesaguis on Arvos at the end of the tour in December.

Returning to our shores for Meredith and Fairgrounds festivals, Japandroids snuck in a few headline gigs at some surprisingly intimate venues while they were here. Sydney was the final stop, with a sweaty, sold-out show at Marrickville’s Red Rattler – a venue that made a strong impression on the duo.

“It reminded me of some of the spaces we’d play at in Vancouver when we first started out. A lot of those spaces are gone now, but that DIY kind of ‘collective’ thing is a big thing in Vancouver.

“I know Sydney’s been having some issues recently with venues getting shut down and new laws surrounding bars and stuff like that. Vancouver went through that too, we had lots of venues close over the years. But it was really cool to be in a space like that [at Red Rattler] and see it still thriving, despite all the current challenges that this city seems to be facing.”

Comparing the cultural challenges that Sydney faces at the moment to recent developments in their hometown, they shared their thoughts on how Vancouver has managed to pull through.

“Some of it’s just resilience. Some of it is just the fact that there are people who love music. And they’re going to make it work however they make it work. One venue will close down and somebody will open a new one…

“[In Vancouver] there’s a big problem where there’ll be condos coming in next to a club, and then all of a sudden the people who just bought a condo don’t like the loud music. They were clamping down on that for a while, but there seems to be a bit of a push-back now. People are starting to realise the cultural scene in a city is important to its vitality.”

That’s not the only similarity noted between Canada and Australia. According to Dave and Brian, we also share a tendency to create our own “very unique colloquialisms” – the duo taking home the phrase “cheeky durry” as their favourite linguistic souvenir from down under.

Japandroids’ new record, Near To The Wild Heart Of Life, follows the same format as their previous two albums: eight tracks, with a black and white portrait for the album art. Explaining the rationale behind this, Dave and Brian said:

“We did the same thing with this record as well – we had more songs but then it ended up getting trimmed down to eight again. It seems inescapable at this point!”

“[The aesthetic] is kind of about growing up and being influenced by a lot of classic rock and punk rock and post-punk, and liking a lot of imagery that is associated with that. There’s a simplicity to the way a lot of those bands were presented – you know, just a cool photo of the band leaning up against the wall, looking cool. And I think that simplicity and that directness works for us because it’s a reflection of the music.

“The music is supposed to be very simple and very direct, and we wanted imagery that went along with that… it’s like here’s the band, here’s the songs, here’s the record.”

Together, the three albums certainly feel like they’re part of a series, a trilogy. Asked whether the band sees their own records in this way, they said:

“Yeah, I think we do! That’s actually something that we took a lot of care with when doing the album art. If you go through the records, you’re seeing a document of where the band was at this time and place. We use quite a lot of photos and we try to recap what was going on, leading up into that.

“I wanted to preserve that for someone maybe 20, 30, 40 years in the future – they can just have the three records and get the whole story from that. In these days of information overload… I think that’s a bit of a lost art.”

The chemistry between the duo remains as solid as ever, with Dave and Brian likening their relationship to marriage.

“Well, playing in a band is a bit like a marriage of sorts. It’s a very intense relationship that you have with somebody. It’s something that continues to evolve.”

Listen to the whole interview above.

Near to the Wild Heart of Life is out on January 27.