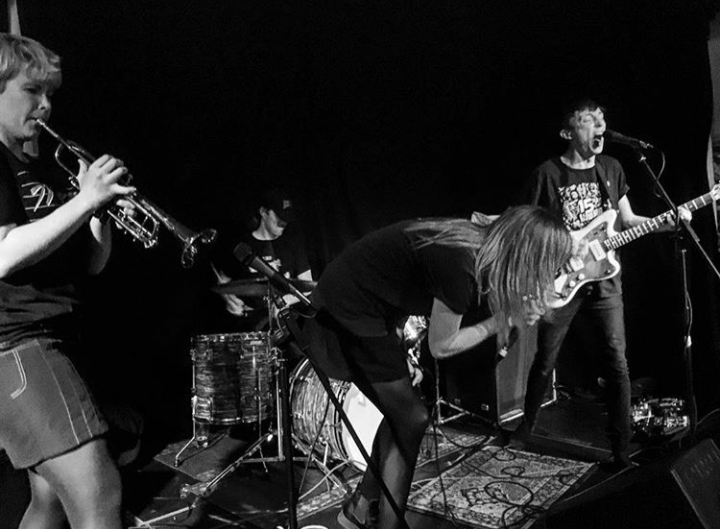 Drawing inspiration from doom and noise music, their experimental tracks are made to overwhelm and intrigue. The Gadigal Land-based group formed in 2017 and have spent the last four years playing shows and honing their sound. Their debut album ‘Fire Sale’, released in July, is a culmination of these years of DIY experimentation. Independently released, all proceeds of the album go to Black Rainbow.

The quartet eases you into Fire Sale with sombre brass notes, before a wave of noise hits you square in the face. This technique carries throughout the album, with the group only utilising calm and quiet to maximise the impact of their cacophonies. Vocals twist and turn underneath layers of sound and each track brings a new sense of unease. A highlight comes midway in ‘Who Yells’, with repeated vocals of “pressure building up” foreshadowing what’s to come.

A heroic brass line underlies the track, dragging the listener on its tumultuous journey. Repeat listens are a must to grasp every part of the track. Overall, Fire Sale is ordered chaos at its finest; every sound has a task, if you choose to seek it out.

Want a taste of what inspires PURE MASS? Band members Alice and Dean have provided some of their essential tracks:

The Body are stupidly prolific. Their album No-one Deserves Happiness released in 2016 – this strange, brash noise/metal record – was hugely instrumental in our starting PURE MASS. And those screams? What a nice time.

Big Brave are another primary influence, particularly vocally and rhythmically. Their album Au De La in 2015 is an actual gift. Deeply sincere, defiant and delicate. Minimalism building to heaps, on repeat forever.

IDYLLS – ‘In The Barn’, from 2017’s The Barn on Holy Roar and Black Wire Records, Meanjin

Meanjin’s IDYLLS are a long-standing DIY staple. We were prematurely blessed to support them touring this album, The Barn, when PURE MASS was still taking shape. Deeply danceable riffs for days.

Party Dozen rule massively. Riff of the Year Award 2016. A saxophonist and percussionist two-piece making music loosely based on improvisation, nothing explains the warped places their music winds up. Their show in April was the first live music we had seen after 13 months and we had a small cry and some tacos. 11/10

Industrial doom built to demolish white supremacy and all colonial projects. A conjuring.

Sound artist Sia creates hyper-vulnerable soundscapes and has unbelievable creative energy and taste in musical collaborators. Such a gem.

Canine is my best friend in the world. I give them a million kisses a day. Canine does not like me, and barks at me and bites me all day long. Up The Queer Punx.

Super innovative, approachable and dynamic. This album is genuinely a very good time.

From the BLACK to COMM series, a collective effort by DIY creatives and the people who love them, aimed at directly support artists and community radio. The entire BLACK to COMM catalogue can be found at Black Wire Records’ Bandcamp. Also, check out Diploid’s avante-improv Make It Up Club set with The Body in 2019.

This song in particular on this album, with the nauseating pitch-shifting of the guitars, sounds like motion sickness. 2016 was such a great year according to this playlist, no wonder we started a band.

Shellac – ‘Didn’t We Deserve a Look at You the Way You Really Are’ from 1998’s Terraform on Touch and Go Records.

My Disco – ‘Recede’ from 2015’s Severe on Temporary Residence Limited

All tension, no release.

—
Tune in to Up For It with Courtney Ammenhauser every Monday from 6am to meet your Independent Artist of the Week!