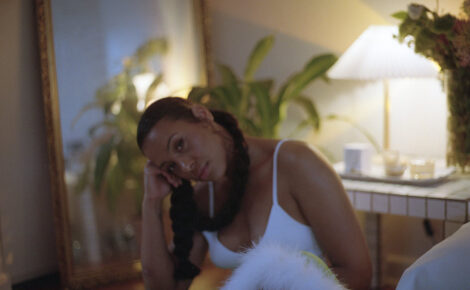 She aims to create stories and imagery in the listener’s mind through her unique and entrancing voice. She’s enthralled the audiences of Strawberry Fields Festival, Melbourne Music Week and Melbourne Fringe Festival with her immersive tunes, and there’s much more to come.

Speaking to Anusha Rana on Up For It! on Monday morning, Hayku Kyah gave an insight into her influences, including Lauryn Hill, Kanye, Kid Cudi, Pharrell Williams and Amy Winehouse. A pivotal point in her musical development was sitting on her cousin’s bed in Toronto and hearing Nicki Minaj’s Still I Rise.

“I learnt every word, unintentionally, and I really loved rapping.”

Hayku Kyah’s latest release Gunfyre is a gritty six-minute track produced by Hayku and IJALE. The interplay between the heavy bass and jittering production and Hayku’s rhythmic flow is mesmerising; keeping you on edge for what’s to come. The release was accompanied by a virtual gallery inspired by the track, which included a tarot reading and a curated playlist. A key phrase repeated throughout the gallery is ‘f*ck the algorithm…the icon era is dead’.

“Most of us, as artists, aren’t really banking on being the next Nicki Minaj or the next Beyonce, so to follow the same pathways they took to get to where they are may not actually be in our favour, so f*ck the algorithm and just don’t worry about it.”

There’s a lot in store for Hayku Kyah this year –  including an artist in residence slot in July and a bunch of singles underway. She’s also working on an EP, but don’t expect a traditional rollout: “There’s a lot to come. Gunfyre was such an intimate experience for me, I really wanted to explore non-conventional ways of releasing music. Gunfyre, with the gallery, was really exciting for me and I think I’ll do more things like that.”

Listen to more of Hayku Kyah via the full interview audio up top or Gunfyre below.