Independent Artist of the Week: MADAM3EMPRESS 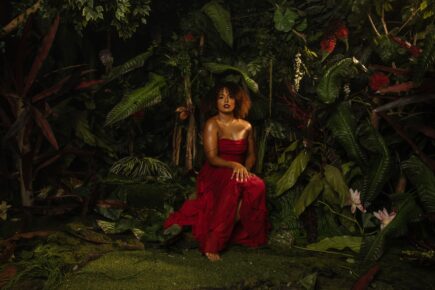 There’s definitely something in the water in Sydney at the moment, because the R&B coming out of this town is second to none. Leading the pack is MADAM3EMPRESS, whose silky tunes are unabashedly sensual.

Born in Sydney and raised between Australia and South Africa, she’s unafraid to express desire, sexuality and passion in her work. The result is smooth tracks that overflow with groove and soul.

The jewel in MADAM3EMPRESS’s impressive crown is ‘Locking Eyes’. It immediately hits you in the face with its slinky bass riffs and complex, Latin-inspired drum lines. There’s even an expressive guitar solo that wouldn’t be amiss in a Santana song. MADAM3EMPRESS croons over it all, caressing you with her stunning vocal range. MADAM3EMPRESS explains the concept at the heart of the track:

“’Locking Eyes’ is about a deep connection of energy between two people. When you look across a room and you lock eyes with someone – that magic is undeniable. This locking of eyes and the energy you feel can be overwhelming and even scary at times. You may fight it, and you may deny it, but that energy is there.”

It’s a perfect example of what MADAM3EMPRESS does best – create tracks that make you want to get down, whatever that means to you. ‘Locking Eyes’ is a departure from her previous release ‘Come On Over’, a slow jam filled with 90s R&B harmonies, although ‘Come On Over Pt 2’ bridges the gap between the two with its upbeat UK dance beat. Each track may have its own distinct atmosphere, but all of them are guaranteed to get you moving. Despite only having a small discography for the moment, MADAM3EMPRESS has definitely shown that she’s not one to be boxed in.

Tune into Up For It with Courtney Ammenhauser every Monday from 6am to meet your Independent Artist of the Week!