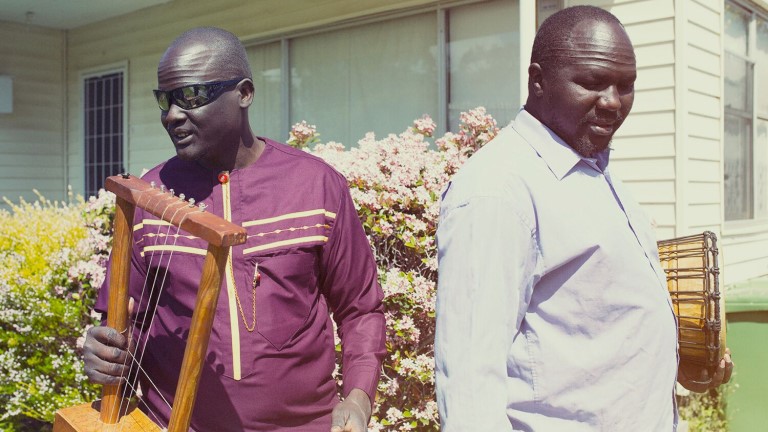 Gordon Koang is a musician hailing from the Upper Nile region of what is now South Sudan. Playing the thom (a kind of Sudanese banjo) he inherited from his family and accompanied by his cousin Paul Biel, Gordon performs a blend of traditional Neur rhythms and original compositions in English, Arabic, and his native language, Neur.

Having recently arrived in Australia seeking refuge from a country torn by civil war, Gordon and Paul are seeking asylum in Melbourne. They are currently awaiting approval of permanent residency in Australia, which will allow them to once again travel and perform around the world.

‘Mal Mi Goa’, Gordon’s first release since moving to Australia, is a song sung in his native Neur language, calling for peace between the people of Sudan and around the world. Recorded in a cramped attic studio in Collingwood, it is also the first release for the Music In Exile initiative – a project by Melbourne indie label Bedroom Suck aimed at increasing access and visibility for artists working in culturally or linguistically diverse communities in Australia.

Check out ‘Mal Mi Goa’ below:

Tune in to Up For It  every Monday morning to meet your new independent artist of the week.