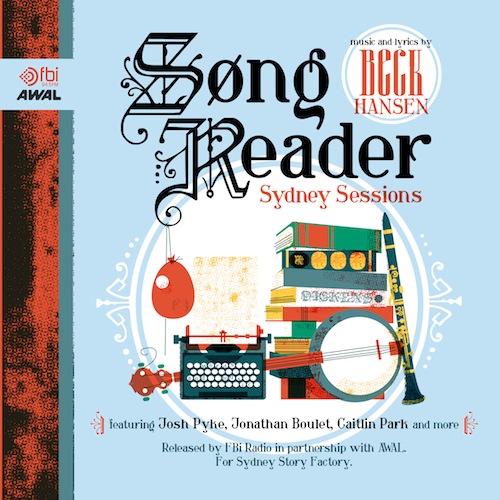 The Brag and FBi Radio present

Music and Lyrics by Beck Hansen

OUT NOW ON ITUNES AND BANDCAMP

Indie rock figurehead and pop weirdo-genius Beck caused a stir last year when he announced the release of his latest “album”; Beck Hansen’s Song Reader was released only as sheet music through McSweeney’s, the cult US publishing house founded by author Dave Eggers. With this innovative and gorgeously presented book, Beck invited fans the world over to interpret, arrange, and reinvent each track however they chose. Thousands of versions of these timeless, quirky songs were uploaded online and performed in venues around the world, including one special fundraiser in Sydney.

Some of NSW’s most critically acclaimed musicians, guided by musical director Brian Campeau, performed their unique interpretations of the Song Reader album at The Standard on December 19, 2012. Including band performances by Richard In Your Mind and Jonathan Boulet, and appearances by Elana Stone, Josh Pyke, Caitlin Park, Sarah Blasko and more – backed by members of The Green Mohair Suits – the Song Reader Sydney raised over $13,000 for the Sydney Story Factory, with tickets sold out completely several days earlier.

Now, Kobalt Label Services, AWAL and FBi Radio are proud to present a collection of studio recordings taken from the rehearsal and collaboration sessions preceding the Song Reader show.  From haunting, ramshackle rags and ballads to heavy garage guitars and sunny pop, Song Reader – Sydney Sessions is a beautiful document of the collaborative process and community spirit that led to its creation.

The album, like the concert, is in benefit of the Sydney Story Factory. This new non-profit writing centre in Redfern is dedicated to helping marginalised young people through one-on-one tutoring, inspired by Eggers’ series of 826 Valencia centres around America.

Watch The Green Mohair Suits perform an acoustic version of ‘And Now Your Dollar Bills Have Sprouted Wings’ live at FBi!