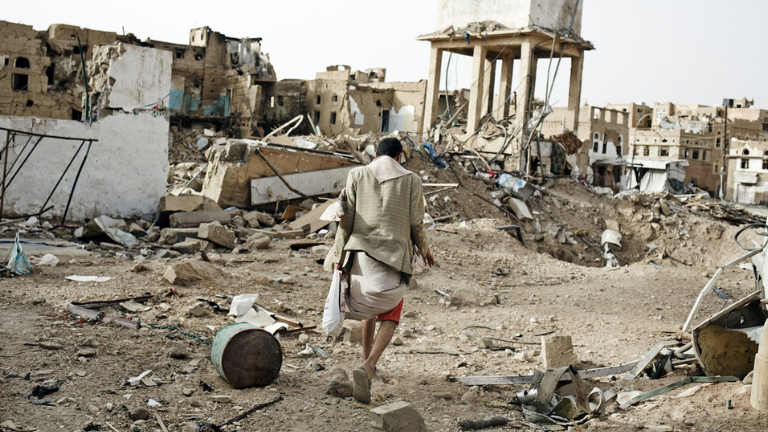 Each week on the Sunday Dispatch, Lindsay Riley talks with writers, activists and experts to better understand issues from all around the world. This week, he sat down with Michigan State University professor Dr Shireen Al-Adeimi to discuss the complicated origins of Yemen’s civil war, and the culpability of countries like Australia in the conflict.

Yemen has struggled through one of the worst humanitarian crises in the world since civil war broke out in 2014. Nearly 250,000 Yemenis have been killed; with millions displaced or facing crippling food, health and housing insecurity. Shireen emphasised that while the roots of the conflict are complex, Western nations such as Australia and the United States have enabled the violence to continue. They are responsible for supplying the Saudi Arabian-led coalition instigating warfare in the region with weapons, training, and military equipment.

“I think they share a huge part of the blame. And it’s completely disingenuous for countries to say that they’re concerned about the situation in Yemen while they themselves are either officially part of the coalition or have been fuelling the coalition in various ways including weapons sales and logistic training and so forth.”

Violence in Yemen continues to escalate. January saw at least 100 civilians lose their lives to the conflict: making it the highest month of casualties since the war began. In addition, recent airstrikes from the Saudi Arabian coalition have destroyed houses and infrastructure, and cut out internet across the country for four days. Shireen reiterated that the targeting of civilians by the Saudi/Western coalition has been “systematic and widespread” since the start.

“They target infrastructure, they target food sources, they target water sources, knowing that Yemen is very poor. It’s the poorest country in the Middle East, among the poorest in the world… Blockading the country, preventing trade from happening, making the country relying on aid and then using that aid strategically kind of as a weapon of war. These are the tactics that they’ve employed over and over again.”

The Biden administration has increased the sale of weapons to Saudi Arabia and the UAE despite promising to end U.S. support for the war in YemenThere has also been speculation that the administration will move to put the Houthi rebels on an official U.S. “foreign terrorist group” list. Shireen says this is a hypocritical and cynical move which would punish Yemeni civilians.

“If you are going to list the Houthis as a terrorist group, and misuse whatever this mechanism is first of all as a political move, then you will stave the entire population of Northern Yemen. We’re talking 22 million people in that area who rely on aid, rely on remittances, where aid organisations are not going to be able to operate… If this goes through, it will be one of the most devastating things anyone has done to escalate this conflict in a way we’ve not seen before.”

Shireen, alongside other activists in the U.S, is campaigning for an end to U.S support in the conflict. She encourages Australians to put pressure on their own elected officials to end Australia’s military involvement in Yemen, for any chance for peace in the region.

For more interviews like this, tune in to the Sunday Dispatch from 8:15am each week on the Sunday Overhang with Lindsay Riley. In the meantime, you can listen back to Lindsay’s full interview with Dr Shireen Al-Adeimi up top.