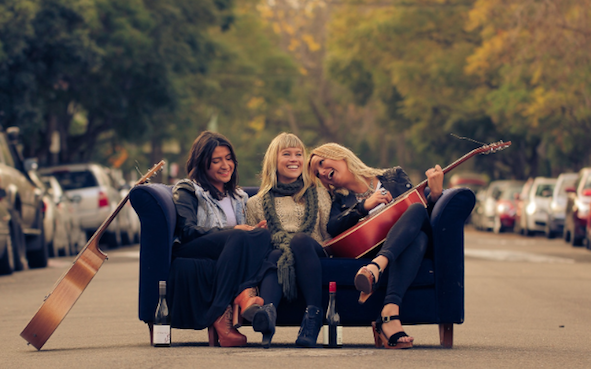 They are also three women with real feelings and human dreams. After the success of their first single ‘Boardwalks‘ and their latest single ‘Hide‘, the girls are riding high and ready to take on the world and any mountain-sized monster that seeks to destroy it, battling it with their sweet melodies and heart-warming harmonies.

Daniel Prior lured Little May into the FBi studios with promises of kittens and icy-poles in order to try and work out their secret identities.

DP: Thanks for coming in and talking to me today.

Little May: Where are the kittens?

I’ll ask the questions here! Now, tell me, who are you?!

Hannah: I’m Hannah and I am the vocalist.

Annie: I’m Annie and I am the guitarist and banjoist and backing vocals.

Yes, “Banjoist”, that sounds like a real thing … So where did you all meet?

A: Liz and I went to school together. But then she changed schools and met Hannah there. It wasn’t until years later that I got in touch with Liz again, because I heard she was playing guitar with Hannah, and they had been writing songs and playing together for a number of years. And that’s how it all started.

Why folk music? Why not death metal or something that the kids could get into?

L: We thought about it and almost went down that path.

H: Yeah, but we all had similar influences, folk influences, so it was the easier choice.

A: Yeah, and since we are sitting down playing acoustic instruments, we just didn’t have the right energy for a Death Metal band as we did Folk.

Fair enough. Maybe one day, huh? You’re getting ready to release an EP in November? How’s it coming along?

H: Yeah, it’s been finished for a while now. It feels really old now.

L: It’s actually two years, if you consider when we started to first write and play the first song.

H: To us it feels more like ‘Little May’s Classics’ than something new.

If only that were true. What has been the most memorable moment as Little May?

L: I think that time we played at the Brighton Up Bar on Annie’s birthday and she was drunk.

L: I don’t know how you played either!

H: She was standing on stage and then she looks at me and says, “I’m really drunk”. I can barely play notes when I’m drunk, let alone solos.

L: Yeah, she did alright though. You’d never know that Annie’s drunk though because all she does is stand there and sway and smile.

A: I’m secretly drunk all the time.

I knew it! Anyway, where did the name Little May come from?

L: We were trying to think of a name for ages, and then I was told by a friend that bands come up with their names by using the first few letters of their pet’s names.

A: I’ve never heard that before.

L: Well, that’s what we did. Hannah and I were obsessed with our dogs at the time, so I took Tilly and Maggie, and shuffled the letters and came up with Little May.

A: Coming up with band name is hard, because they always sound so dumb.

H: I still question Little May because I wonder, “Is it too pretty?”

Do you have the same issue with song names?

A: Oh yeah, we had a song for a while that we just called ‘Banjo Song’.

Okay, before I give you an icy-pole and send you on your way, I have one last question: What did you want to be when you were six?

L: An olympian, I wanted to go to the Olympics for athletics.

H: Umm, I wanted to be a dancer on a cruise ship. Jazz ballet.

A: I was going through a bit of a dolphin phase so I wanted to be a marine-biologist.

L: I thought you were about to say you wanted to be a dolphin.

Little May’s self-titled debut EP is out in November.