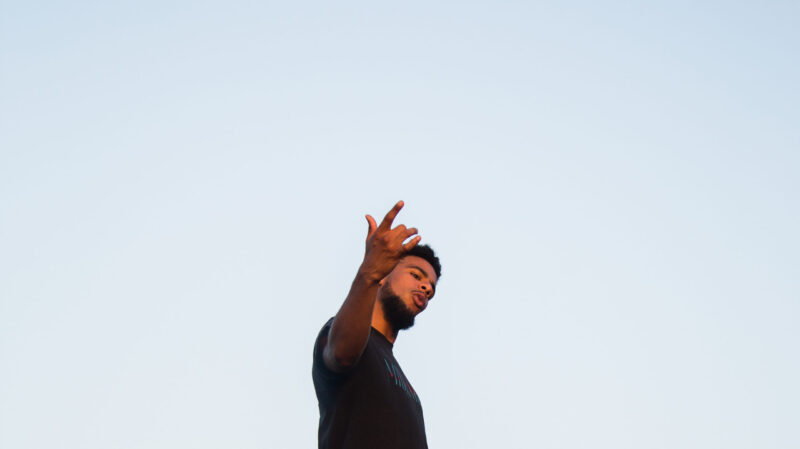 Hailing from South-western Sydney, Ruu. fell in love with hip hop at the age of 12, when he first heard a 50 Cent song. Several years (and aliases) later, Ruu. is releasing hip hop that will get you dancing but also make you think – something that’s earned him the title of Independent Artist of the Week. He spoke with Lill Scott on Up For It! about his creative journey thus far.

“I remember when I first started writing music in high school. The first artist that got me into music was 50 Cent, the rapper. I was in high school in class trying to write lyrics like 50 and Eminem, and I was like this doesn’t sound like me at all.”

Ruu. describes the music he makes under his current moniker as “introspective, with a little bit of fun”. The description is apt, as Ruu.’s music seamlessly incorporates differing styles of rap from his lyrically dense and conscious flows to woozy codeine-laced production à la DJ Screw.

To see the breadth of styles Ruu. draws upon, look no further than Ruu.’s latest single ‘I Never,’which draws upon his time on exchange in the USA.

“‘I Never’ was pretty much based on the fun experiences I had there, hanging out with friends, going to ‘parties’ or kicking back with them chilling on the weekend or even during school nights and stuff like that… also shows the duality of when I turn around, come back from whatever party or kickback we were having and realise that I have a test or an assignment due the next morning and it’s 3am and I haven’t started yet.”

Produced by Western Sydney’s b.uzz, the opening half of the track oozes confidence and shows Ruu.’s love of J Cole-esque conscious rap. At the end the track is “screwed and chopped” which is sure to please lovers of UGK and DJ Screw.

Having completed a Bachelor of Music, Ruu. is currently in the midst of practical placements for his Masters of Teaching. He doesn’t find himself too influenced by what the kids are listening too, but he still tries to keep abreast of new releases. As a seasoned rap fan There’s not much Ruu.’s  students are listening to that he hasn’t already heard either.

“The kids, I know everything they’re listening to. I caught one of them listening to Bobby Shmurda the other day in class, and I said “outside, not in this class!” he laughed.

With his studies taking priority at the moment, there aren’t any live shows on the horizon for Ruu. right now. That doesn’t mean fans will be left hungry though, as Ruu. teases what the rest of 2022 will hold:

“I do have a couple of projects coming out later this year, there’s no date for them yet but hopefully I have one called ‘Blackish’ coming out some time in the third quarter in the year and I have one with my guy Reni called ‘Rennessy and Maliruu’ coming out around December. If you love bling era hip-hop, that late 90s/early 00s, then stay tuned because we’ve got some stuff in the bank for that.”

Ruu. makes rap that effortlessly incorporates different sub-genres and flows to create a sound that feels entirely individual and authentic. Check his music out below!