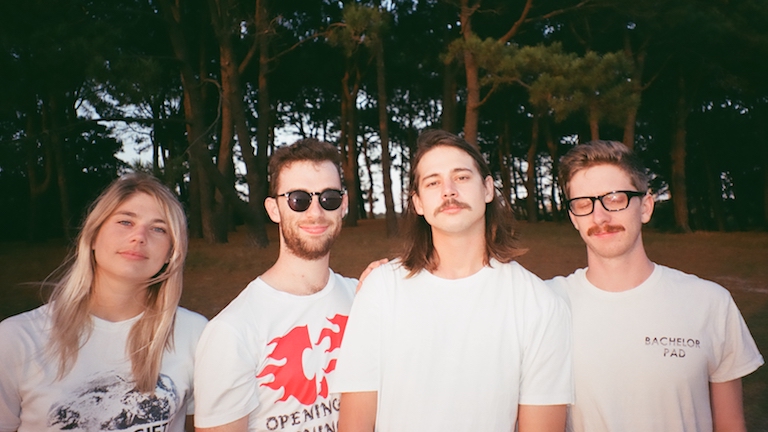 According to Wikipedia, Bachelor Pad is an elimination-style American reality television game show, but allow us to disambiguate for you – it’s also a wild-eyed Sydney garage punk band that we’d much rather get behind.

Over the past 8 years Huw, Tim, Grace & Billy have more or less been churning away with their lo-fi recordings as Bachelor Pad, running the gamut from garage surf rock to garage rock classic and now a little spicier punk rock. Reliably, they’ve given us fun, sharp, guitar-heavy jams, with a blend of brash percussion, synth undercurrents and instantly likeable lyrics.

In the three years since they released their second album, Bachelor Pad is for the People, Bachie have gone down another route. This year’s seen the arrival of the first bunch of jams since BPIFTP, with the decision to cut songs to two minutes and under getting the point across quicker and more effectively. Rather than LPs, they’ve also gone for EPs… probs keeping in line with their short & sweet ethos, amirite?

With gems like ‘I’m an Adult’ and ‘Living for the Weekend’ on August’s nifty-named BPEP17, its follow up is already on the horizon. ‘Easy Living’ is the first taste of BPEP18, comically addressing the modern-day dilemmas that come with having “a lot going on,” cos we’re “too busy living.” Although it’s apparently not the case for Bachelor Pad, as BPEP18’s due v. soon…