Home is where the _____ is: Geoff Sobelle’s ‘HOME’ helps fill in the blanks 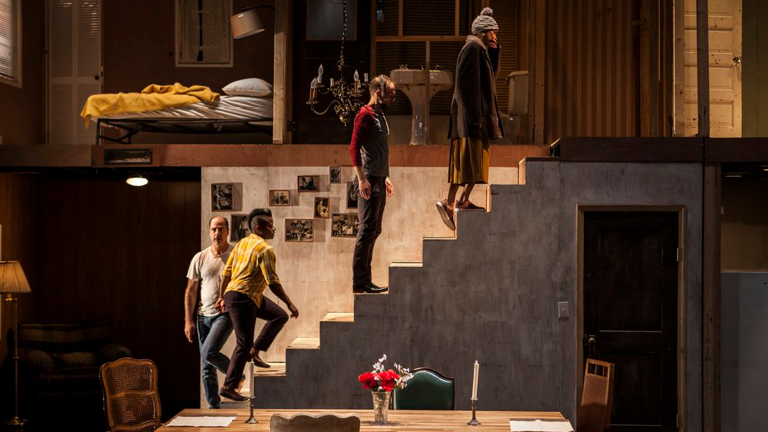 ‘Home’ can mean different things to different people. For me, home is where the heart, bed and eggs are. But for Geoff Sobelle, the creator and director of HOME (presented at Roslyn Packer Theatre as a part of Sydney Festival) home is a spectacle of ridiculousness, chaos, repetition and deeply odd beauty.

HOME oversees the building of an entire house on stage, with sections and materials brought in variously by actors and stagehands. The performers, Geoff Sobelle, Sophie Bortolussi, Ching Valdes-Aran, Justin Rose, Ayesha Jordan, Luke Whitefield, and Elvis Perkins, live in the house – with everything that the word ‘live’ entails. They eat, drink, throw parties, reprimand children, take part in weddings and funerals and everything in between. The essential link between our sense of selves, our sense of living, and sense of place are expertly played with.

The show opens with a man bringing out the scaffold of a wooden wall. He unfolds it, folds it back down, tries it out in different ways. How might this first wall be founded? On what is this scanty yet essential idea of a home built? In Home, that idea is built upon the foundational spark between the audience and Sobelle’s actors, a spark that leaps from the first figure’s eye-contact with the audience, and his laugh acknowledging his clumsiness and the awkwardness of his diminutive presence on the enormous stage. This both disarms the audience and evokes the cluelessness inherent in building that house of our own, in creating or acquiring a concrete physical place of belonging despite our ignorance as to the life (and the self) yet to unfold within its walls. 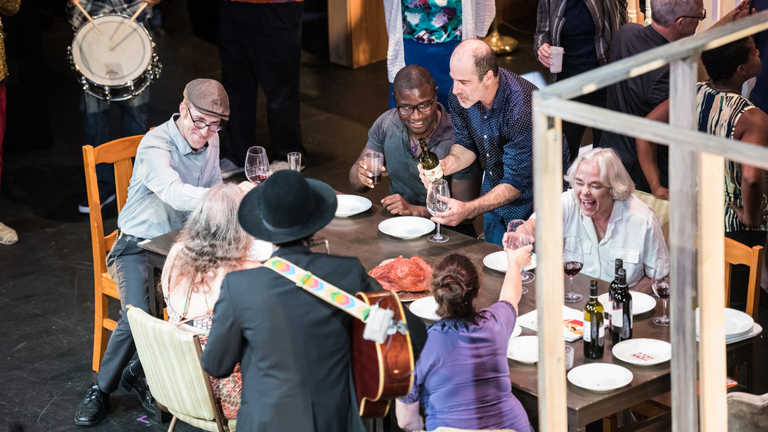 Throughout, Sobelle uses this awkwardness and silliness to masterful effect, drawing out the ridiculous from the mundane

“I create surreal, poetic pieces that look for humanity where you least expect it and find grace where no one is looking.”

A man climbs into a bed and a woman appears from under the covers a second later. An entire bathroom scene revolves around people in their own home going to the toilet, having a shower, drying themselves – but in the same bathroom, the same space. Characters appear and disappear behind curtains and doors, repeating roles, as if on a mad carousel of daily life, engaged in the routine march of sustaining one’s being. And it’s through his courting of laughter that Sobelle’s craft most incisively complements his intent. He writes:

“I believe that comedy is the highest order of art, and that laughter allows an audience to open, become vulnerable and experience the full realm of human emotion to discover a new plane of experience.” 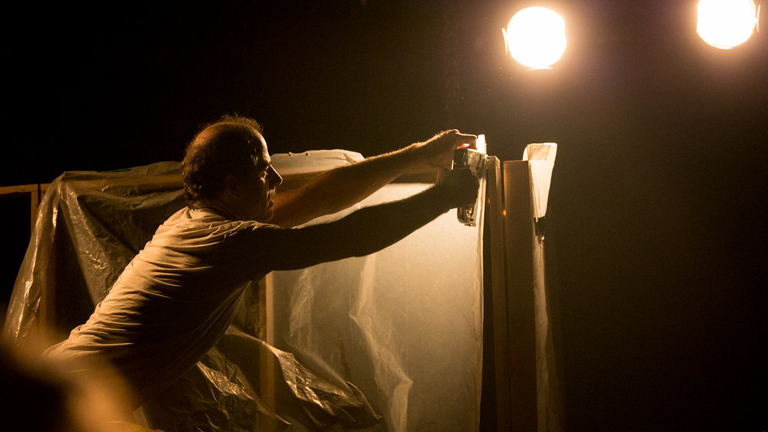 The show is indeed hilarious, but the comedy happens in spite (or perhaps because) of the fact that there is essentially no dialogue through the 110 minutes of the show. Sobelle writes that he ‘believe[s] that the really good stuff doesn’t come from the writer’s room […] It comes from listening.’ and he welcomes the audience to practice listening with him. Through the use of the ridiculous, the familiar and the lack of dialogue, Home creates a intimacy that breaks down the stage/audience duality. The stage swims outward and the audience slips inward, and at one point does so quite literally as an audience member is welcomed on stage during a house party.

I sit with two housemates in row E, we overhear two audience members tell the story of their childhood homes. We see our own home in Stanmore, the bits of ceiling that fall off of their own accord, the marks we’ve made in the carpets and kitchen, the memories we’ve forged burnt into every part. Given the interpretive space by this deft production, the audience was able to watch unfurl on the stage the very cluster of rooms and corridors that represent years of their own secret memories.

Not only does HOME give some peak insights into humans, the house, the home, and the stage, but it teaches us how to look (and listen) for those things in our own lives. Be surprised. Be on the lookout. Be open and vulnerable and engaged. Because there’s grace and beauty to be found in places unlooked for HOME shows us how much fun finding it can be.

In the Shade, MCA Artbar online, Connected to the land & more! Culture guide on-air every weekday at 4:30pm