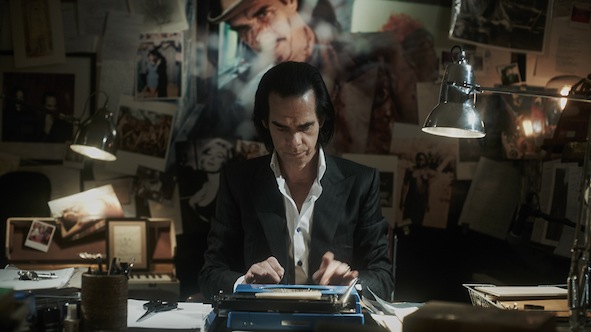 I have a confession to make right off the bat… I never really got into Nick Cave’s music.

I’m far more interested in him as the screenwriter of movies like Ghosts of the Civil Dead and The Proposition than I am interested in him as a musician. I assume he’s great because people whose taste I respect say he is; but liking his music just seemed like a lot of work.

I say this because when watching the new movie 20,000 Days on Earth, I got the distinct impression it was not made for me.

This is a sort of documentary/narrative thing. The synopsis:

“Drama and reality combine in a fictitious 24 hours in the life of international cultural icon, Nick Cave.”

When I first read this, I got really excited because I thought it said Nic Cage, and THAT is a movie I would watch… but I re-read it and still went along anyway.

What we have here is Nick engaged in some real and some dreamy conversations with past collaborators and band members, including Kylie Minogue and Ray Winstone. This is mixed with some musical performances, archival stuff, a weird therapy session and other bits and pieces. The movie seems to assume that Nick Cave is just the most fascinating guy ever and spending a whole film in his presence is a huge privilege. If you love the guy, you will eat the movie up. Me though? I got a bit fidgety, and was checking my watch more than usual.

I was surprised by how normal he was, though.

Based on my very limited knowledge I was expecting some kind of massively eccentric vampirish goth dude. To be honest, I was kind of hoping for that. Instead he came off like a pretty regular middle-aged guy: driving around and watching TV with his kids.

Anyway, look: this kind of exists outside of good and bad. It’s an interesting, nicely-shot variation on the music documentary, but it’s for the fans only. If that’s you you probably should not miss it. Meanwhile, I’ll keep waiting for an in-depth Nic Cage documentary…