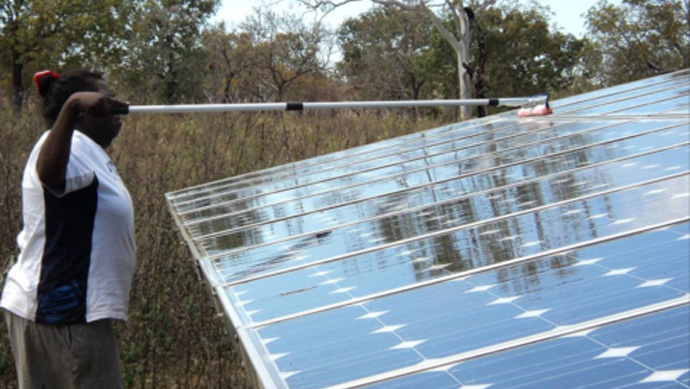 In case you missed it, Australia is in the midst of an energy crisis, according to our pollies. The issue gained momentum on the political stage following a series of blackouts in South Australia last year. More recently, tech billionaire and Tesla co-founder Elon Musk — proto Iron Man — swooped in on Twitter, declaring he would fix the state’s energy problems in just 100 days, or your money back. What a sales pitch!

A key focus of the energy debate has been addressing increasing energy bills. We’ve certainly heard from our country’s leaders, but we haven’t heard from regions facing the nation’s highest electricity costs.

Remote First Nation communities have some of the highest energy bills in the country. Reliance on inadequate and inefficient supply of energy from diesel generators have driven costs into the thousands.

“In north-west NSW, the average power bill for an Aboriginal household is around $1200 a quarter … a lot of people paying those exorbitant prices are on unemployment benefits.”

Fred Hooper, Murrawarri elder and member of the First Nations Renewable Energy Alliance, says renewable energy schemes should be rolled out across all remote Indigenous communities. By reducing the cost of living, quality of life will increase.

The First Nations Renewable Energy Alliance was formed at the Coalition for Community Energy conference in February. Twenty-four Indigenous leaders have come together to act as a representative on behalf of remote Indigenous communities. The Alliance aims to initiate and assist these areas in transitioning to renewable energy in partnership with private enterprises and the Federal and State governments.

The Alliance believes that not only is the current supply of power unsustainable, it is not in line with the communities’ values about the use of the Earth. Mr Hooper explains that climate change is a key focus of The Alliance. Rising temperatures have caused a higher demand for power to cool “substandard housing”. This has increased the community’s cost of living. At times, there have been blackouts for up to two days.

The Alliance will meet in the first week of May to establish a plan of action. Members will draft a code of conduct in delivering renewable energy and how best to communicate and involve the communities in the process. There will be a focus on lobbying government to look at the policies surrounding cost and supply of energy in remote communities.

“And also to look at how we can reduce these power bills … it’s killing a lot of our people. They’re in debts for a long time. They make arrangements with these big power companies and paying them off while they’re on the dole. But they’re paying for the rest of their lives. They have a process where they have to commit at least a quarter of their income to just paying of an electricity bill.”

Earlier this month, Maningrida, a remote community in the Northern Territory, became an example of how renewable energy in Indigenous communities could work. The town was given funding to be the first of thirty to have solar power systems installed. The installation is funded by the Federal and NT Government’s $55 million Solar Energy Transformation Program (SETuP) with the Territory providing $27 million. The remainder will be provided by the Australian Renewable Energy Agency (ARENA). The Maningrida project consists of 2,500 solar panels that will produce enough clean electricity to power 130 households in the community. The expectation is that this will reduce the reliance on diesel by 15 per cent.

Mr Hooper says that the bottom line of the transition is to help Indigenous communities stay on the grid by getting off the current energy grid.

Hear the full story on Backchat: